According to Caesar, the European Celts made wide use of chariots in warfare with a warrior standing behind the seated driver. The Celts extolled virtues in a chariot driver such as turning in a tight circle, backing up straight and leaping over chasms. Caesar also claimed to witness reckless and dangerous feats such as the warrior running along the pole to stand on the yoke of the horses or the driver urging the horses to jump logs and ditches at full speed. The latter, a back and neck-breaking stunt if performed in a farm-cart, might work with a chariot if it had a flexible spring suspension allowing the vehicle to actually lift off the ground. So, what were the chariots like and how were they used?

Rather than use the chariots as an attack vehicle, they were more likely to be used as a mode of delivery to the battle line. Racing up and down between the opposing forces, warriors would bellow out their battle cries and challenges above the roar of the heavy iron rimmed wheels, to intimidate their opposite number before dismounting and advancing on foot to accept an offer of single combat. The chariot driver would then retreat to a safe distance and wait for the return of victorious warrior or make ready for a speedy retreat if things went badly.

Made from sturdy ash wood, apart from the one-piece, iron rimmed wheels, which was probably a Celtic innovation – and hub fittings, chariots had double arched sides with the main frame lashed to the axle and the pole using wet rawhide which shrank tight, pulling joints together securely. Inside the arched sides was a Y shaped rawhide strap suspending an independent platform within the main frame. Leather slings supporting a carriage body were a tried and tested method of suspension and were still widely used in the stagecoaches of the Wild West. 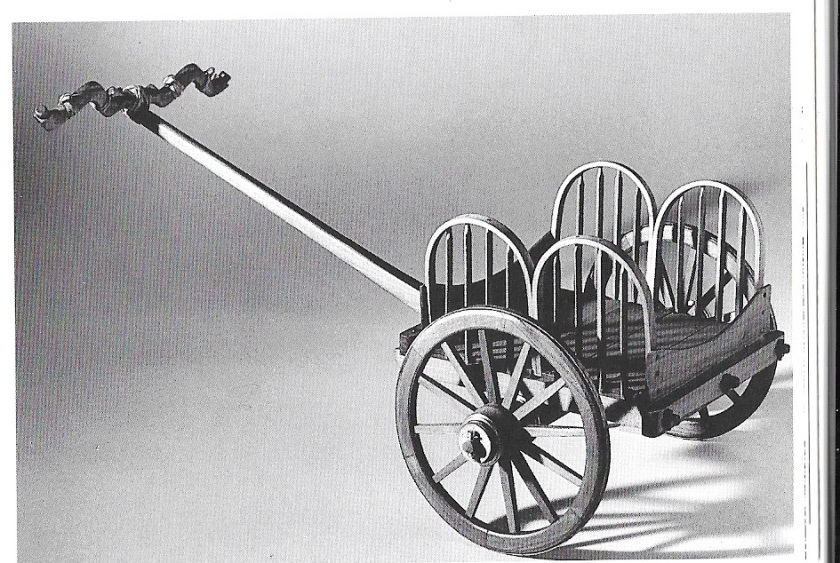 The wooden spoked wheels were positioned beyond the edge of the body, offering greater stability and better cornering while the hilly, bumpy, boggy and rutted rough terrain made the need for a driver to be seated as he would have had a lower centre of gravity, adding to the overall stability.

The internal platform frame, again made from ash, was suspended from the main frame by leather straps and supported by two underneath battens fastened to the Y straps. A long strip of rawhide made the warp and weft of the platform, on which the warrior would stand, giving just the right amount of give and springiness to counteract a rough ride.

Unfortunately, there is no evidence of the Irish Celts ever having used chariots but I am afraid historical accuracy did not prevent me from making extensive use of chariots, as evidenced in the following excerpt from the chapter Claiming Emer in Part Two of my novel, Raiding Cúailnge.

Laeg hopped onto the open front of the chariot, taking the reins in his left hand, his right shoulder against the right forward side arch of ash wood with one foot braced against the opposite arch, his right foot extended onto the pole leading to the yoked ponies. At a nod from Sétanta, he expertly guided the light chariot over the coarse grassed, bumpy plain, rutted with old chariot tracks, to the north of Brúgh na Bóinne and forded the Boann river heading south towards Luglochta Logo, the iron-shod wooden wheels sending up gouts of water on either side of the chariot, drenching Sétanta, who balanced easily on the interwoven strips of rawhide which made up the springy strap work floor.

“Hold on,” shouted Laeg, the cold wind whipping his long hair back as he urged the ponies on and over the first of the horizontal logs which made up the corrugated trackway of oaken beams laid over the boggy ground stretching before them. Sétanta grunted and allowed his knees to bend slightly to counteract the jolting although the rawhide straps supporting the body of the chariot provided a rough suspension.