I mentioned in a previous post somewhere that I had been looking forward to trying a Peruvian national dish, cuy al horno – roast guinea pig – but overall, I’d have to say I prefer the dish more commonly eaten down on the coast – ceviche. Chunks of white fish in a spicy lime marinade – tiger’s milk – served with an variety of corn kernels and chopped veg.  Absolutely gorgeous and so perfect for a hot summer’s day.

Here’s my take on it. For this particular serving, this is exactly what I used: 320g of firm white grouper fillet, two tomatoes, 1/2 a red, 1/2 green capsicum, one small Lebanese cucumber and 1/4 of a red onion, three limes and one lemon with 1/4 teaspoon of coarse sea salt crystals and one chopped red chili, corn chips and popcorn

The basic ingredients, which remained the same as far down as Santiago in Chile, are:

Any firm, white fish with ½ cup of lime juice for each 500g or pound of fish.

Red onion, chopped and as much seeded capsicum (any colour), toms, red onion and cucumber as you like, lime juice, salt and a red chili, coriander or mint or both, corn chips or popcorn and sliced avocados.

Check the fillet for skin, bones and the dark red bloodline, if any. Depending on thickness, cut the fish into large, even chunks or slice into thin pieces and put into a glass or ceramic dish along with enough lime juice, (approx. 1/2 cup per 500g fish), sea salt and finely chopped chilies to completely cover. Set aside and chill.

I put the chopped veg in a separate dish, sprinkled with olive oil and a dash of freshly ground pepper. I didn’t want to put the veg and fish in the same dish so as the veg can keep their colour and not blanch in the lime marinade.

When the fish becomes translucent, whiter in color and opaque, drain off the marinade and mix the fish gently with the chopped veg.

I gave the fish about 90 minutes and then straining it and reserving the marinade. A thick chunk of fish was cooked through to the consistency of medium rare meat. If you like it more well done, give it up to four hours in the lime marinade.

I spooned some of the veg mixture into a bowl, ladled a scoop of the drained fish on top, and sprinkled with chopped coriander and popcorn, with corn chips around the dish. I forgot the avocado! 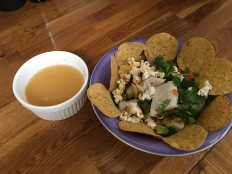 I suppose some might be put off by the amount of limejuice – too acidic, I can hear people say. However, limes and lemons while acidic of course, somehow become alkaline when consumed and besides use only as much of the strained marinade – tiger milk – as you feel comfortable with.