Named after Simon Bolivar from Venezuela who, in 1804, declared that he would fight to the death to break the chains binding South America to Spain, leading to the Declaration of Independence for Venezuela in 1811 followed by most of the other Spanish colonies after the invasion of Spain by Napoleon. As far as I know, Bolivia is the only country in the world to be named after its liberator!

The journey on the bus from Cusco to Puno on Lake Titicaca on the border between Peru and Bolivia, crossing over 4000 metres, left me gasping with the effort of breathing at this altitude. However, Lake Titicaca, the largest lake in South America on the border of Peru and Bolivia and the “highest navigable lake” in the world at about 3,812 metres, gave me the illusion of sea level and my ragged breathing was enough for me to take a day-trip to the fantastic, floating islands on the lake.

Small manmade islands have been constructed by the Uros (or Uru) people for generations from layer upon layer of cut totora, a thick buoyant reed that grows everywhere along the shores of the lake. Many of the golden coloured islands are more or less half the size of a football field, containing several thatched houses, with about 25 people living on the island I visited.

La Paz, in Bolivia, the highest capital city in the world, is at about 3,600 metres above sea level. The air felt very thin so a simple task like tying my shoelaces left me breathless and panting for oxygen.

On the surface, Bolivia seems to be the most under developed of all the countries I have been in so far on this trip, with the exception of Cuba. For starters, the bus trip from Puno, on the border, to La Paz should only have been 7 or 8 hours. Instead it ended up being nearly 12. By no str

etch of the imagination could the bus from Puno cater to the “super executivo” class and it was a jerky ride to the border post. No problems there, off the bus and into Peru Immigration to get an exit stamp, walk 100 metres and enter Bolivia and get an entry stamp.
Then, across the lake on a small, cramped and crowded motor boat while the bus laboured across the lake on a barge powered by a tiny outboard engine, back on the bus again and onto a nondescript border town inside Bolivia where a change to a inferior bus was delayed by hours and then finally off to La Paz,

through barren, desert country until the outskirts of the capital city approached.

Protesting, indigenous people however, had blocked off the city, with rough barricades barring all the main roads to the centre. The bus was forced to stop and take on a native guide who then directed the bus up, down and round about through a maze of unpaved, rutted, dirt roads only suitable for a 4X drive and somehow the bus lurched and twisted and limped past the rough blockades of piled heaps of dirt and stone blocks until eventually beginning the descent into the valley where the heart of the city lay.

Pretty amazing but by this time I was having serious problems catching my breath and I just took a taxi to a hotel in the centre and crashed out on the bed. 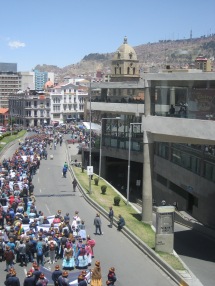 Massive demonstrations began in the city the next day with thousands of protesting miners parading through the streets. Every corner was covered with heavily armed police, 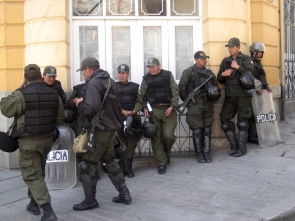 toting pump action shotguns, teargas and heavy duty riot gear while the protesters poured into the city, firing off bangers from what looked like bamboo tubes, blocking off all exits.

Toyland soldiers stood guard outside principal buildings, in rather sharp contrast to the heavily armed police on every street in the centre of the city.

Had enough of gasping for breath in the altitudes of Peru and La Paz and I decided to leave to anywhere south and at a lower altitude. I just needed to get down to sea level again where I could breathe properly and I decided to leave as soon as the city barricades were removed. I must admit I was not prepared for the high altitude, as anywhere from 3600 metres plus didn’t do a lot for me despite me chewing my way through wads of coca leaves with my breath rasping in the lungs. Consequently, many of the activities on offer – mountain climbing (!), trekking, white water rafting, zip lining, death route cycling downhill and so on – were all out of bounds for me so I pretty much confined myself to armchair drinking and sampling the local cuisine – roast guinea pig (not much to gnaw on, as I mentioned) and roast alpaca – delicious and almost a cross between lamb and beef but slightly gamier.Bolivia was also notable for appearing to have the greatest number of indigenous people. 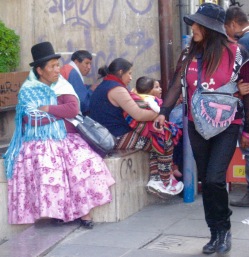 Monstrously broad-hipped women in voluminous coloured skirts, heavy shawls which doubled as blankets and makeshift backpacks, their heads topped with incongrous bowler hats while all the men seemed smaller and dressed in standard jeans and t-shirts with baseball caps.  Amazing!

Sights are extraordinary but hard to do justice to with my camera as I took a bus meandering through the blockades 5 hours south to the small town of Oruro where I connected with one of South America’s rare trains running down to Villazon on the border with Argentine. I love train journeys – possibly my favourite mode of long distance transport and I was amazed that train travel is relatively rare in this part of the world. That was until I caught the noisiest, slowest and bumpiest train I have ever been on for about 15 hours down to Villazon on the border with Argentine. No sleepers, a minimalist buffet car and only 140-degree reclining seats here!

An easy border crossing, no paperwork or forms involved whatsoever, merely answering a desultory question or two and walk over into Argentine and another world. While Cuba was behind the times, Ecuador organised and capable, Peru suave and cosmopolitan, Bolivia half arsed, Argentine immediately struck me as being modern with its highway diamonds, flyovers, sky scrapers, functioning traffic lights, traffic cops with white gloves – and all this in only a small cross border town and then on to Salta, on the edge of the Andes and the breathing is almost back to normal.