This is a standard Malaysian kampong style recipe and while it is called a curry or “gulai” no commercial curry powder is used. Instead the exquisite flavour comes from the dried spices and seeds, which are traditionally pounded in a stone mortar, mixed with the dried chillies, fresh ginger, garlic and lemon grass, or serai, and santan, or coconut milk, in Malay. 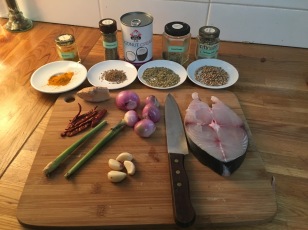 My experience with coconuts before living in S.E. Asia was limited to the hard, hairy nut we would buy once a year on Hallow’een when I was a child. Then, my father would use a corkscrew to punch through two of the three small depressions at the top of the nut so that he could drain out the juice before labouriously cracking open the shell with several increasingly hard blows of the hammer until, misjudging his blows, the shell would suddenly shatter and pieces of it would fly around the kitchen. The thin, insipid water drained from the shell was what I mistakenly then thought was coconut “milk”.

I remember goggling with amazement when my neighbour in the kampong, demonstrated the ease with which he unhusked a coconut and then sliced it open, evenly and cleanly, with one blow of his parang. The so-called milk was poured into a rusty basin for his goats to drink and then the real magic of the nut appeared.

Sitting astride what looked suspiciously like a stripped down bicycle frame with a heavy, rounded, metal grater knob emerging from where the handlebars had been, Mamu would rotate and rub each half of the shell over the grater, scraping out the firm white flesh inside the shell. Two cups of water were added and stirred around this mound of grated coconut in a large basin. The kneaded and squeezed mixture strained through a fine sieve resoled in 2 cups of a brilliant, white, thick, deliciously sweet milk, called the first squeezing or the cream. Two more cups of water and the mixture kneaded and squeezed one more time, resulted in a much thinner liquid called the milk. For most people, it will be much easier to just buy a can of coconut cream or milk from the local Asian supermarket.

Delicately flavoured lemon grass can be grown in most back yards or bought in Asian supermarkets either fresh, dried or bottled and adds a wonderful flavour to a host of Asian dishes. The stalk is quite fibrous, so remove the tough outer husk and then smash the inner stalk with the back of a cleaver to release the flavour before adding it to the mortar. 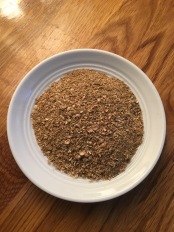 In most S.E. Asian cooking, the spices are pounded and ground daily so that the sudden thumping of pestles and mortars traditionally done, squatting on the floor, echoes throughout the afternoon in the village.

In Malaysia, I used tenggiri, a glorious, firm fleshed variety of deep sea Spanish Mackerel. Albacore is the name used in West Australia for this beautiful, white-fleshed fish. Grilled, fried, baked or curri

ed, it requires serious over-cooking before it falls apart.
So honoured in S.E. Asian waters that it was the subject of a North Vietnamese Stamp, and may still be, for all I know. It is usually sold cut into thick, plate-sized steaks but any firm fleshed, white fish can be used.

Let me know what you think