I have just finished Lamentation, the sixth novel by C. J. Sansom in the Shardlake* series, a massive 700 page historical mystery and detective story centred on the last year of the reign of the Tudor monarch, Henry VIII from the summer of 1546 until his death in January 1547.

The humanitarian and caring Matthew Shardlake, lawyer at Lincoln’s Inn, is once again, unwilling, involved in the murders and religious mayhem that ran rife during Henry’s reign.

The novel begins with the ghastly account of the burning at the stake of Anne Askew, and three other unfortunates in Smithfield, accused of heresy, a charge which Shardlake himself will face later on in the novel, recalling the last time the hunchback lawyer was dragged to the Tower of London for a tortuous questioning. 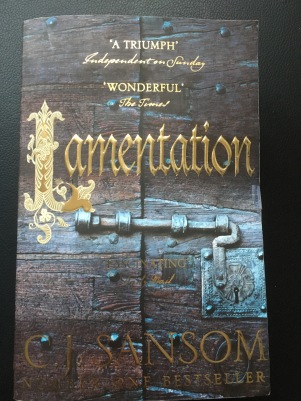 Without giving too much away, as Henry VIII vacillates between reform and traditionalist religion during the last months of his life, his court is divided between the Catholic and Protestant councillors vying to control Henry’s successor, the eight-year old Prince Edward. Henry’s last wife, the reformist Catherine Parr, formerly Catherine Latimer and the unrequited love interest of the solitary and melancholic sergeant -at-law, enlists his aid as she desperately fends off attacks from within the court and from mysterious and powerful influences in the world outside Whitehall.

As with the previous five Shardlake novels, the multiple plots concern a legal case unconnected with the hunchback lawyer’s involvement with the Tudor courts, something he had previously sworn to avoid. The inevitable conflicts, brought about by intimidation and violence, confirm the determination and bravery of Shardlake, showcasing his conscience and the inevitable consequences in a world of religious and political turmoil.

As always, London itself plays an atmospheric role as Shardlake trudges the dusty and pungent streets and alleyways of the medieval city in his quest to aid the endangered queen and to solve the litigations case between two quarrelling siblings with which he has become embroiled. The authentic background, the rich characterisation, and the wonderful weaving together of plot and historical reality combined with the final, real-politic twist make Lamentation the apotheosis of this sextet of fantastic novels.

Excitingly, C.J. Sansom hints, in the very last pages of the novel, that Shardlake may continue to see further service, but this time, in the service of the future Queen, Elizabeth I. Like many others, no doubt, I hold my breath in anticipation and look forward to a continuing Shardlake saga.