Originally marketed at the semi-literate in the 19th century, comics were eventually perceived to be childish, and moved on to target children. They were certainly popular during the 1960’s when I was growing up but my parents always derided them as ‘comi-cuts’ or ‘penny dreadfuls’, no doubt due to the fact that in 1955 the Children and Young Persons (Harmful Publications) Act, supported by the Archbishop of Canterbury, The Home Secretary and the National Union of Teachers among others prohibited “any book, magazine or other like work which is of a kind likely to fall into the hands of children or young persons and consists wholly or mainly of stories told in pictures (with or without the addition of written matter), being stories portraying (a) the commission of crimes; or (b) acts of violence or cruelty; or (c) incidents of a repulsive or horrible nature; in such a way that the work as a whole would tend to corrupt a child or young person into whose hands it might fall”.

It was certainly unusual to see an adult reading a comic at that time. My father seemed convinced that comics would undermine a solid basis in reading books and by implication, my successful studying later.

It didn’t really matter to me what my parents approved or didn’t approve in those days because comics were too expensive for me. Comics like the Beezer, the Dandy – with loveable but fierce Black Bob – and The Beano were beyond my purse but someone always had a copy and was happy to lend.

Later it was the Valiant and the Eagle with Dan Dare and their glossier pages and more post-little-kid stuff yet the majority of the content was still humourous, derring-do, adventure, exploration (I fondly remember The Wolf of Kabul and his (nameless?) sidekick whose weapon of choice was, for some insurmountable reason, a much battered and taped cricket bat – or ‘clicky ba’ as it was referred to), and that kind of thing until the advent of the 68 pager.

Then there were the ‘Commando’ comics, unique, in that, first off, they cost a shilling, and they were a much smaller size (7 × 5½ inch), and could easily be kept in a jacket pocket and they always featured war stories and displayed a slender commando style dagger on the back cover with a précis of the story.

Graphically told in strong black and white images, stories were of hidden British valour, – a cricket player accused of cowardice under fire redeeming himself by accurately lobbying a grenade down a Panzer tank’s barrel or a Scottish roughneck chafing under military authority successfully defeats a sword wielding samurai soldier in the Pacific theatre of war, the samurai drawing on his training, the Scottish guy depending upon his heritage and background!

Of course there were the Dell and Marvel comics of Superman, Batman and other super heroes but I have to confess I was never really into them. Comics were, nevertheless, common among all ages and backgrounds in Europe, but I never paid any attention to what people were looking at or reading until I was living in Italy in the late seventies.

I knew a little Latin and phrases like ‘Avanti’, and ‘Mama mia’ all gleaned from old Commando comics summed up my knowledge of Italian and then I encountered ‘il Giallo a Fumetti” comic books, pretty much the same size as the Commando, and I developed an obsession with Diabolik and the skill with which the anti-hero was developed along with my clumsy grappling with Italian language.

Diabolik was a master thief, a ruthless killer, a force to be reckoned with on account of his uncanny ability to mimic the people he replaces. Along with his lissom side-kick, Eva Kant, the two enjoying a high octane lifestyle of luxury and danger, endlessly pursued by the drab Inspector Ginko in his staid striped tie.

I had never really considered the noises different cultures ascribe to sounds and animals. For me, dogs had always said – ‘bow-wow’ and roosters went ‘cock-a-doodle-do’ but here in the world of Diabolik, a cockerel went ‘kir-ree-ker-ree’ and silenced guns went ‘stumpf, stumpf’ while a key turning in a Yale lock went ‘ trac-trac’.

The difference here was that Diabolik was outside of that ‘proper’ world where heroes were clean-cut and good, always prevailing over bad, and the wicked got what was coming to them. Not here in these (subversive?) comics, as Diabolik always outwitted and easily eluded the forces of justice, leaving Ginko, and the rest of the police force in the fictional city of Clerville, frustrated. I vaguely remember something about Diabolik being banned in various countries for the same reason that cowboys in white hats always won out in Hollywood movies but that all just added to his mystique.

Supporting that strong taut storyline was the excellent graphic art in stark black and white. The ‘chiaroscuro’ – an Italian word for the play of light on dark (!) – brought scene elements into sharp focus – Eva’s pensive face in half-shadow, Ginko’s fist clutching his pipe – but it was not until Christmas of 1980 that I came across the colour version in a collection of stories in a bumper size annual.

The use of colour, pastel shades of pinks and blues, purples and red were, for me, anyway, a companion to the lighting in rock’n roll theatres worldwide. Sharp, vivid colours clarified action and defined intent.

Then, in the very early 80’s, Lat, the cartoonist for the New Straits Times (Malaysia) published ‘Kampong Boy’ and later ‘City Boy’ and I was hooked once again by both the storyline and strong black and white pictures as well as being an excellent introduction into village or ‘kampong’ life in rural Malaysia. 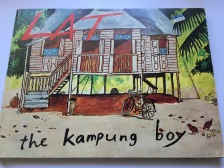 Nevertheless, I successfully avoided all further contact with graphics and manga despite their spiralling success and popularity throughout the world – think of TinTin and Asterix – but I have to say I always found the latter two a bit too cramped and cluttered for my liking.

Jump to now and in a bookshop, idling looking for stuff

for grandchildren, and myself I came across the beautiful Amulet Series by Kazu Kibuishi. Since when were ‘Comics’ on the New York Times Best Seller lists? Gone were, I have to admit, the rather chunky, blocky portraits of Diabolik and the nubile Eva Kant, here all were flowing and sinuous, the colours swirling and blending in unimaginable ways while the storyline was emotionally taut – the children’s father dying in an car crash in the first few pages – so much so that

some parents felt it was too intense for children, rather in the same way some mothers protect their children from perceived monsters with Max in ‘Where the Wild Things Are’ being deemed an undesirable associate!

Manga (comics) and Anime (animation) seem to be widespread with their vivid characterisation and visuals, comparative to cinematic style, shots of profile or details around the eyes, or the hands clenching a pipe, along with other close-ups in sharp, contrastive colours or the whole vista in a long shot.

Overall, I am terrible impressed with the skills involved – graphically retelling a story already written, Game of Thrones, for instance or known

as in (slightly risque) The Legend of Cú Chulainn or to tell, from scratch, a 100% original story such as the Amulet.

Comics are not books and graphic novels are not movies just as movies are not TV. Each medium is obviously different and while there may be some overlap between them, they each present a different approach to entertainment and that cannot be a bad thing. 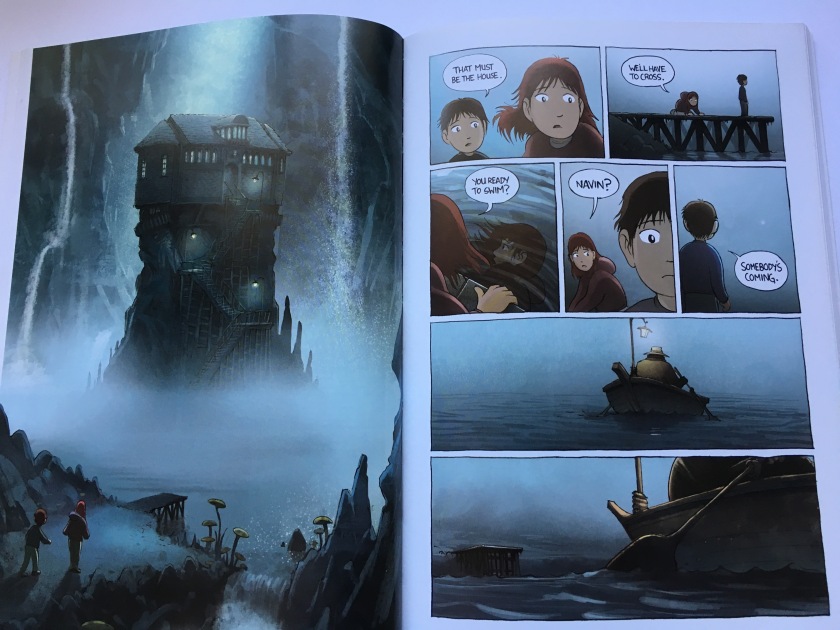