All along the Black Sea route from Istanbul to Baku in Azerbaijan, every local restaurant a ‘lokanta’ in Turkey and beyond seemed to serve some type of frothy yoghurt-like drink. Intrigued, and not always wanting to drink alcohol before lunch, kefir was delicious, cool and tangy and yet different from place to place.

Originating in the Caucasus region, milk kefir, like most cultured or fermented foods, for example, sauerkraut, kimchi, miso, kombucha, cheese and beer to name but a few, has a long and rich history rooted in simple agrarian cultures of preserving food. Fermented foods preserved in this way claim a range of health benefits from better digestion to a strengthened immunity system through the growth of good bacteria known as probiotics. Unlike prebiotics found in fibre-rich foods which go through the small intestine before being fermented in the large colon of gut, probiotics are live beneficial bacteria naturally created in fermented foods. 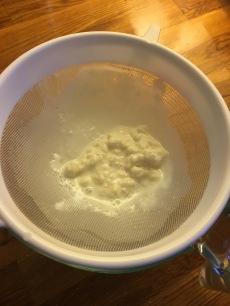 Probiotic kefir is, basically, a gelatinous mass of fermented milk, harbouring a generous variety of bacteria and yeast containing dozens of microorganisms, some of which haven’t even been identified, and which is used to make continual batches of milk kefir.

Kefir grains, so-called because small and numerous colonies of yeast and bacteria feed off the fat, or lactose, in full-cream milk, breaking it down during fermentation into simpler sugars, becoming bulky and lumpy like clotted cream or the surface of a cauliflower in appearance. These ‘grains’ are, in fact, the starter culture that will ferment fresh milk to continually produce the kefir drink itself. Over approximately 24 hours, the microorganisms in the kefir grains multiply and ferment the milk, turning it into the kefir dairy drink. Then the grains are sieved from the liquid and can be used again by adding fresh milk and the whole process can start over again. 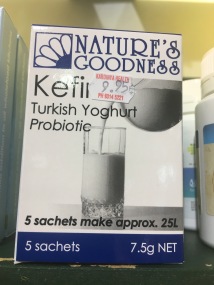 Back in West Australia, after returning from the Caucasus, few supermarkets seemed to stock kefir but packets of freeze-dried cultures can be bought from health food stores where each packet can make up to 5 litres but by the third or fourth litre, the resulting kefir becomes progressively weaker and grains never form. This powdered starter, with far fewer bacteria and yeasts, could not compete with the microorganism content of milk kefir made from live grains which I later managed to locate on the Internet locally.

In a small zip lock bag was a live culture of some white, curdish looking goo which I poured into a glass measuring jug and added a cup of fresh, full-cream milk before covering the jug lightly and leaving it out on the kitchen counter for the bacteria and yeast to do their magic. A day later, I topped up the litre jug, gave it a stir and left it for another 24 hours.

Using a nylon sieve and a nylon spatula I drained the liquid into a glass bottle, poking and pushing at the goo in the sieve until I could see the grains. Back into the jug and another cup of milk to feed the microorganisms and to start the process off again. 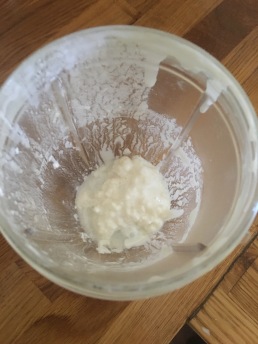 Health benefits for probiotics in fermented products are widespread because their live microorganisms may help restore the natural balance of gut bacteria and may even help protect the heart by reducing “bad” LDL cholesterol levels and modestly lowering blood pressure. Claims that kefir boosts the immune system, aids in digestive problems, improves bone health and may even combat cancer are all made in support of kefir, but for me, it is a pleasant drink, certainly preferable to the ordinary yoghurt or milk I used to have before and presumably the fermentation has done nothing to alter the protein and calcium already present in the milk I used to make my daily kefir. 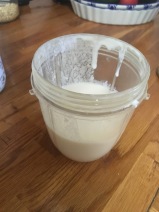 I suppose vague claims that probiotics such as kefir “supports good digestive health” are meaningless and the other touted health benefits are debatable but I look forward to the sour, tangy tart taste with that hint of effervescence, a ‘frizzante” tingle on the tongue in the mornings.