(I made a recording of chapter 1 if you care to listen.)

Bricriu thrust open the door of the Craobh Ruadh, so violently that the fire in the central hearth belched a cloud of smoke while the candles on the long table on the dais flickered before he stamped into the hall, slamming  the door shut and glaring around from under heavy black eyebrows before seeing Conor on the dais. The Craobh Ruadh, the Red Branch, was one of the three great halls within Eamhain Macha, the heart of the kingdom of the Ulaidh, and attracted the fighting men and champions who protected the northern kingdom and punished transgressors. These warriors and fighting men in turn were mentored by those former champions, heroes still, veterans like Conall, Ferdia, Fergus, Bricriu and others of their generation and older still, like Sencha the Draoidh. But now it was the time of the new generation of warriors and champions and, despite his age and seniority among the veterans of the Craobh Ruadh, Bricriu knew they called him The Bitter-tongued behind his back and refused to see him for what he believed he was.

Conor Mac Nessa, the once boy-king, looked up from the game of fiduchell he had been playing with Fergus mac Rioch and frowned. ‘Guard yourself,’ he muttered to his companion, ‘and keep a civil tongue in your head for you know full well the bile that man produces’. Fergus glanced over his shoulder and then shifted on his haunch so the his sword lay unimpeded by his side.

Conor knew the noisy arrival of Bricriu would do nothing to ease the ache he already felt in his temples and the top of his head from too much of the unwatered wine he and Fergus had been drinking but hospitality demanded guests must be allowed to eat and drink before stating their business but he guessed what Bricriu would demand.

Sétanta mac Sualtáim, or lately called Cú Chulainn, the Hound of the North, had recently returned from a lengthy foray into Alba and almost immediately on his return, had taken forcibly to wife, Emer, daughter of the wily Forgall Manach and there was much talk for what this would all mean, for Emer was from the southern kingdom of Laigheann.

‘An’ why wouldn’t ye have a feast for yer man?  Sure isn’t he just home here himself with his new woman and how else can we build relationships and keep our brotherhood strong?’ Bricriu demanded, knowing full well the old king’s reluctance to engage in extravagance.

‘It would not be seemly at this time,’ Conor replied.

‘Give Cú Chulainn a chance to settle down,’ Fergus chipped in.  ‘After all, it is a new experience for us as well as for the Hound.’

Annoyed by the old fool siding with the man who had usurped him, Bricriu was more than ever determined to go through with the plan he was beginning to hatch to sow discord among the heroes of the Craobh Ruadh, especially now that Fergus continued to belittle him

‘Well, lookit here to me,’ Bricriu said slyly, ‘if you lot won’t have a feast for your man that all will remember, then I will.  I will return on the morrow and you can give me the honour of accepting an invitation to feast with me.’ He pushed his cup of wine away and stood up abruptly. ‘Until tomorrow then.’.

‘What do you think, Fergus?’ Conor asked glancing over at the older man. Fergus the Unwise they called him, and with good reason, Conor reminded himself, after he had ceded this kingdom of the Ulaidh in return for the favour of his widowed mother, Ness. That was more than three decades past and the kingdom under Conor had prospered in that time and Conor had grown used to listening to the older man’s advice.

‘I’ll tell you this much,’ Fergus sat up and spat into the fire, ‘If we go to a feast organised by that venomous tongued pot-stirrer, there will be more of us dead afterwards than there would be to begin with. Mind you,’ he said, shifting painfully on the bench, ‘if he wants to have a feast let him build his own hall in his own grounds and the expense of that might soften his cough.’

Bricriu feigned delight when Conor agreed to his idea of a feast for Cú Chulainn and his newly claimed woman, Emer of Laigheann.

‘And yes,’ Conor continued, ‘you may organise the feast, Bricriu but you will also bear the expense not just of the food and drink but you must also provide a hall worthy of our Craobh Ruadh and our heroic warriors of the Ulaidh.’

‘Not only that,’ Fergus butted in, ‘You yourself will not be welcomed at that self same feast you organise for if you attend, I know that there will be enmity and malice aplenty.’

Sencha coughed and reminded Conor that he should insist on taking hostages and Bricriu cursed silently at the effort it caused him to hold in his rage at this treatment.

Leaving Eamhain Macha he immediately began preparation for a feasting hall to be built at his lands at Dun Rudraige.  Remembering what Conor had said about the honour of the Craobh Ruadh, he determined to surpass the wonders of that building with his own great hall fit for heroes.  The Craobh Dearg, the second of the great halls within Eamhain Macha, was just a barracks for warriors, a place to store weapons and equipment always to hand, but this, Bricriu determined, his hall would surpass all buildings for heroes in the same way that heroes surpassed all other men. He smiled suddenly, a plan formed for these prancing upstarts, these so smart, so-called heroes, they would be his guests at his hall soon enough and he would see what they were capable of.

The huge pillars of oak had been labouriously brought by teams of six horses and the combined effort of all the slaves was needed to position each of the central pillars into the post holes that the Draoidhs had arranged down the central aisle of the hall while seven strong men were needed to hoist each pole into the rafters overhead so that the roof could be attached.

The long hall was split in two by a walkway, on either side of which were trestle tables and benches with groups  separated by panels of beaten bronze laced with gold swirls and interlocking circles so that all had a space around the huge central hearth.

Every imaginable aspect, whether it be shape, plan, embellishment, pillars and facades, portals and design, was such that the whole outshone its parts. Artisans had expertly filled the inner wattle walls separating the area, fit for queens, furnished with the cured furs and pillows, the benches draped with quilts and skins, from the feasting hall for the men. A massive platform spanned the forepart of the hall, its facing panel studded with rich stones and the burnished metal of shields and naked swords. On that platform were the seats for Conor mac Nessa, king of the Ulaidh and the leaders of Craobh Ruadh, the Red Branch warriors, before whom all trembled.

All of which Bricriu could easily look down on from the loft off to one side among the rafter beams, which he had built, knowing the men of the Ulaidh would not tolerate him to be at his own feast.

Making sure there was a full supply of food and drink, he set out for EM to deliver the formal invitation.

Conor was sprawled on his bench, idly looking at the boy troop exercising on the sward outside the Craobh Dearg when Fergus nudged him, alerting him to Bricriu’s approach.

Sencha sat up straighter and looked at the king enquiringly.  They had discussed Bricriu’s impending visit and they all knew that nothing would suit the cantankerous man unless they all immediately responded with enthusiasm to his invitation to a feast at his newly erected feasting hall at Dun Rudraige. It had been more than two hands worth of moons since he had first suggested holding a feast for the Hound of the Ulaidh and all attempts to delay the inevitable had finally stopped but the Ulaidh were still not resigned to going. Bricriu stepped a pace closer and looked at the faces of the men on the dais before looking around him scornfully.

‘I’ll tell you this much and I’ll tell you no more but what with the expense it has put me to, in not only its construction and victualing, but also in its style and grace, I will be hard put out if the brave warriors of the Craobh Ruadh do not deign to honour my hall with their presence.’

‘We will need those nine hostages,’ Fergus reminded him.

Bricriu ignored him and continued, ‘I will cause enmity between lords and men, between heroes and champions if they will not come to my feast.’

‘Listen to him Conor, worse things will happen,’ Fergus pleaded.  ‘If we go with him it will mean mayhem.  But if we must go, we must go on our terms.’

Bricriu shrugged. ‘I will cause enmity between fathers and sons, mothers and daughters and even between the two teats of the women until they are red, raw and bleeding and begin to grow hair and rot,’ he continued.

‘By the gods around us.’ swore Fergus, ‘I will not attend this bitter feast for I tell you now, that our dead will outnumber us if we accept.’

‘If I may suggest’. Sencha intervened, ‘Perhaps, Fergus, you would reconsider if Bricriu not only withdraws from his very own feast but also permits a nine-man troop of your choosing to guard and protect him at all time.’

Conor nodded sharply at the former king and Fergus grunted ‘I will only attend if you yourself, Bricriu, are not present.’ before slamming his mug down on the table, sloshing some of its contents over his bunched fist. 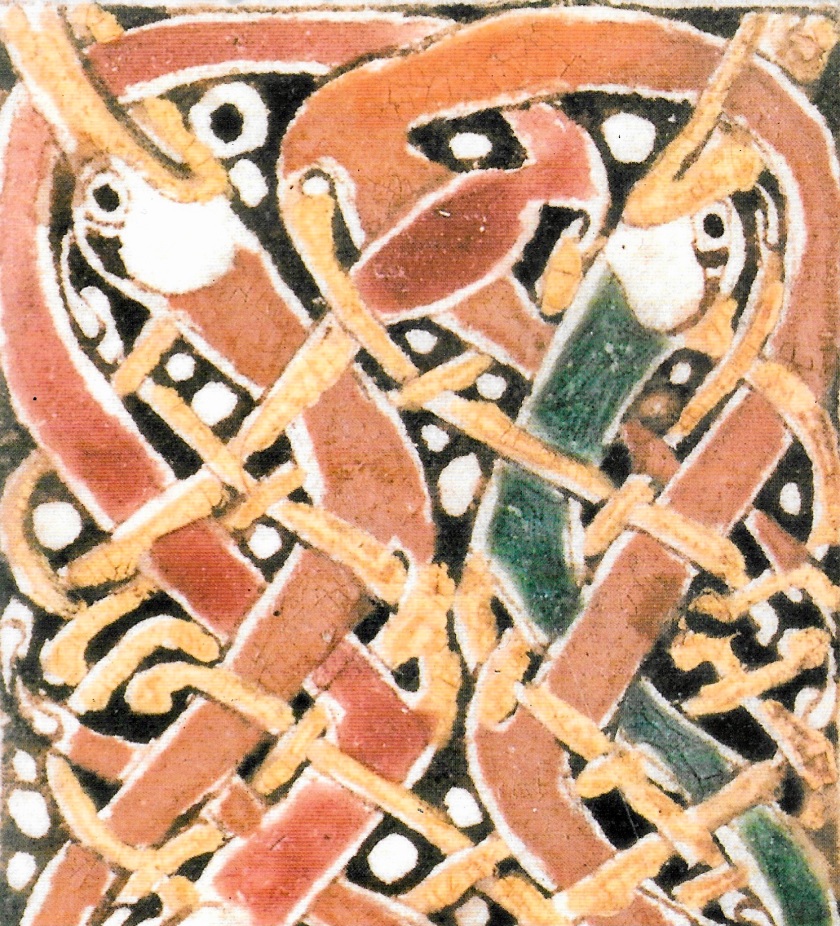