With the exception of balloons, submarines and helicopters, I have tried most major forms of transport – yes, even camels, elephants and horses – but I have to admit that trains are my favourite mode of travel – especially long distance ones, with a sleeper and a restaurant car, hurtling me through time and space.

There have been disappointments of course. One time, on a short trip from Dublin to Cork, I treated myself to a first class ticket, but warm cans of Guinness from a ‘bar-cart’ – not even a bar-car! – detracted from the overall experience.

I was looking forward to different train trips in the Caucasus but unfortunately there were no trains along the southern shore of The Black Sea in northern Turkey which I covered in hops and leaps in very comfortable, intercity coaches but I was really looking forward to the overnight train from Batumi, just over the border from Turkey, in Georgia to the capital, Tbilisi. 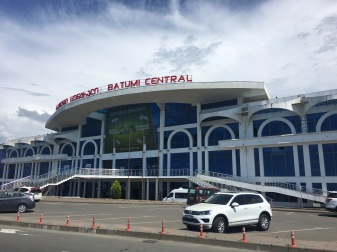 Because of prior difficulties regarding statehood, nationality, form of government and current strains of economics and global trade, the entire region seemed to be unhappy with its immediate neighbours. ‘Turkey has no friends,’ lamented one young professional who had taken her masters at a Dublin university and that story was echoed in one way or another in each of the countries I visited.

Tbilisi would be my hub and from there I could get an overnight train to Yerevan in Armenia and to Baku in Azerbaijan. The only problem was that since none of the countries permitted inter-travel, I would have to retrace my steps to Tbilisi each time before heading off again. While I could enter Armenia from Georgia I couldn’t continue on to Azerbaijan. I’d have to return to Tbilisi the same way and then take another train to Baku on the shore of the Caspian Sea.

Similarly, I could take a train from Tbilisi to Baku but I couldn’t go from Baku to Yerevan in Armenia. What that all meant was a lot of overnight train trips from Tbilisi throughout the Caucasus.

Impressed with the modern Stadler train which whisked me effortlessly from the brand new looking station in Batumi to Tbilisi, I expected, foolishly perhaps, something similar on a longer, overnight, cross border experience. 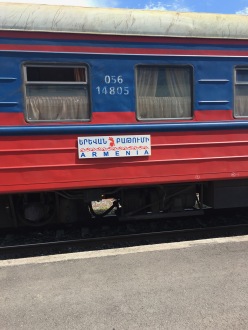 Despite starting in Georgia, the train was Armenian and didn’t look remotely like the sleek brute that had delivered me to Tbilisi a few days previous. This particular train looked like trains did in Hitchcock movies so, pre-warned there was neither bar nor restaurant car on the fifteen hour trip between the capital cities, I stocked up on red wine and brandy accordingly. Thank God I had because the only amenities provided turned out to be a box of sugary jellies, a bottle each of still and fizzy water along with a fresh pillowcase and sheets.

I handed over my first class ticket to the burly blonde guarding the steps outside my carriage who glared uncomprehendingly at me when I greeted her and asked her name. ‘Lana’ she growled before ushering me up the steps impatiently as if the train were just about to depart.

Strolling up and the down the narrow corridor outside my compartment – there was another twenty minutes before the train was due to leave – the only differences I could see between the carriages was mine had the top two bunks removed, leaving only the bottom two.

The window in the compartment was sealed shut and masked with voluminous drapes of bleached out nylon. Only every third window in the carriage corridor outside opened partially. Not a major issue if the air conditioning worked, but when I found Lana, brewing coffee in her private ‘office’, and made

panting sounds, mopping rivulets of sweat running down my face and neck and pleaded for the air con to be turned on, the brutal blonde overseer of the first class compartment seemed not to notice the 37 degree heat and only reluctantly turned the a/c on low, only to turn it off every time the train crawled into another small, sun-baked station.

When I tried to open the half window in the corridor outside my compartment to get a breath of air, she bustled bossily down and shouted at me, along with emphatic hand gestures, to close the window.

“Well, turn the bloody a/c on again” I retorted peevishly, the sweat stinging my eyes and my shirt sticking like a wet rag to my streaming skin.

My initially chilled beer  was almost tepid when, glaring at the sugary jellies and the bottles of water I opened it.

Usually, the regular clack-clack of the train would lull me to sleep but this time, seeming to compound the heat, the train groaned along, accompanied by what sounded like extended and sporadic heavy machine gun fire from the iron wheels.  I had already finished the wine and was about to dose myself with the brandy when immigration marched down the train, collecting passports and then disappearing with them for a worrying length of time before returning them just as the train ground to a noisy and shuddering halt at the border with Armenia.

Surprisingly – and pleasingly – smartly dressed Armenian officials came down the corridor with laptop computer scanners and handed back my passport within a minute of collecting it.

Dawn broke as I panted by a window I had furtively opened – no sign of the bossy Lana – looking at a high white cloud before eventually realising it was the snow-capped peak of Mount Ararat towering over the plains. 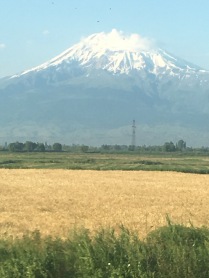 Arrival time rolled around and the train still trundled noisily over flat, dusty plains with no sign of an imminent city.

Questions to Lana about the expected arrival time were dismissed with a brusque hand gesture and a shrug and it was a good four hours late before the train finally shuddered to a halt in Yerevan itself.

I was here, that was the main thing and Armenia is famed for (among other things) its brandy – the only brandy Winston Churchill would drink, apparently – so what could go wrong? And there was the return trip to look forward to and to compare with the overnighter to Baku later on.

Well, it’s that time again – Saint Paddy’s Day. Amazing really, what the day inspires – from massive street parades with green beer to the most unlikely people – Genghis Khan, that sort of thing – discovering that they have Irish ancestry hence it is ok to wear lurid green t-shirts, hats, ties and, (God help me), male and female briefs with stupid slogans – “Kiss me, I’m Irish.” or “Top of the morning to you.”

I broke down recently, for the first time, ever.   Really. I promise. I actually bought St. Patrick whatdymecallit – gimcracks? – from an outlet here imaginatively and (honestly called) The Reject Shop – Why Pay Too Much?.

A pack of four small, moulded plastic hats in bright green with tight elastic chin string cost $3. Anyway for the past week or so, The Reject Shop – and possibly such places as The Five Dollar Store – have offered an array of Irish themed crap while the TV here has bombarded viewers with ancestry ads offering family searches back over many generations. 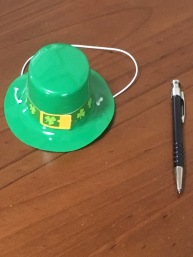 So, I beg to ask, is St Paddy just for the Irish or is he a “Kissable Everyman” for all comers.

What have we done to deserve this? Are Irish people, gender indiscriminate, so cuddly adorable that they deserve to be smothered with kisses like some sleepy koala cub, or cheeky kitten? And is it anything actually to do with Saint Patrick at all. How does that reflect on Irish people in general? Does it apply to other nations’ National Days?

Does anyone in Australia give a tinker’s curse about Belgium’s National Day (and vice versa) and do the Scottish go out of their way to celebrate the festa della Republica? Yet punters, (including myself this year) really do buy ridiculous paraphernalia (green bowler hats, scarves, commerative plates and plaques, t-shirts, key rings, dolls, fake red hair and beards, hideous plastic shillelaghs and grinning leprechauns sitting atop spotted toadstools) otherwise such price conscious emporiums wouldn’t stock them, I suppose.

How much junk is produced for France’s National Day for example, – model guillotines, and plastic strings of onions? Are mini dragons or bravely waving plastic or ceramic flags sold in bulk for other National Days. Who, except perhaps the Americans who actually go so far as to dye their beer green for March 17, would treat their national drink with such disrespect as to add food colouring. Imagine the French dying their wine green or blue!

Ok, so Paint Saddy’s day is both a Feast Day – and a Holy Day of Obligation! (Roman Catholics in Ireland are obliged to attend Mass) – but does that mean we deserve (unreservedly?) to be kissed? So, my point, labouriously, is this, why are Irish, and not specifically other nations, to be kissed on their National Day. Not reviled, despised, thanked, rewarded, recognised, applauded, awarded but kissed? How did this come about?

Is it the culture, the music, the quaintness, the far flung western isle sort of thing, the heavy Arran-knit sweaters or is it more likely that 17 March falls conveniently halfway through the period known as Lent, when Christians “voluntarily” beginning a period of penance by refraining from something or other. In my childhood, it was giving up sugar or chocolate (later it was cigs and the pints) until the breakout on Easter Sunday with chocolate rabbits and eggs, However, on St Paddy’s Day, the traditional Lenten restrictions on eating and drinking alcohol were lifted for the day, which probably has done more to encourage and promote the Saint Patrick’s Day tradition of alcohol consumption in terms of Messrs Guinness & Jameson than any other thing. 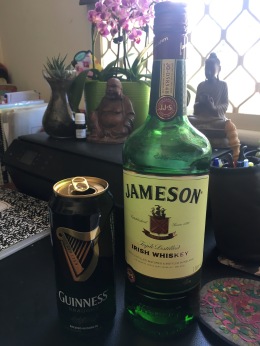 Maybe that’s why the Irish are kissed? Because we found a way to have a bit of a knees-up in the middle of a drab penitential period.

I’ll definitely make an effort (not much required, actually, if the truth be known) to drink a Guinness on Paddy’s Day- either draught in some non-local pub or drink the elegant long cans sedately in my own garden. I’ll probably have a whiskey too, a Jameson, for old time’s sake, I’ll tell myself. I’ll pin up the green plastic mini top hats so thanks Paint Saddy, or Naomh Pádraig, as I knew him when I was a kid.

Here are a few misconceptions about Ireland’s Patron Saint?

He never drove the snakes out of Ireland, as there were never snakes in the island. He is responsible for starting this idea of the ‘island of saints and scholars”. Possible an accomplished womaniser and not too adverse to accepting a back-hander from local chieftains apparently, as, at his trial, he was accused of both. He certainly raised the ire of the British heretical bishops following the Pelagian branch of Christianity at the time while he reviled slavery and its widespread practice.

I don’t think he ever left the “blessèd isle” from when he arrived in his second coming, as it were, in 432 until his death in Four Sixty something A.D. I’ve always admired perseverance, dedication and effort and I’d have to give the Saint full marks there.