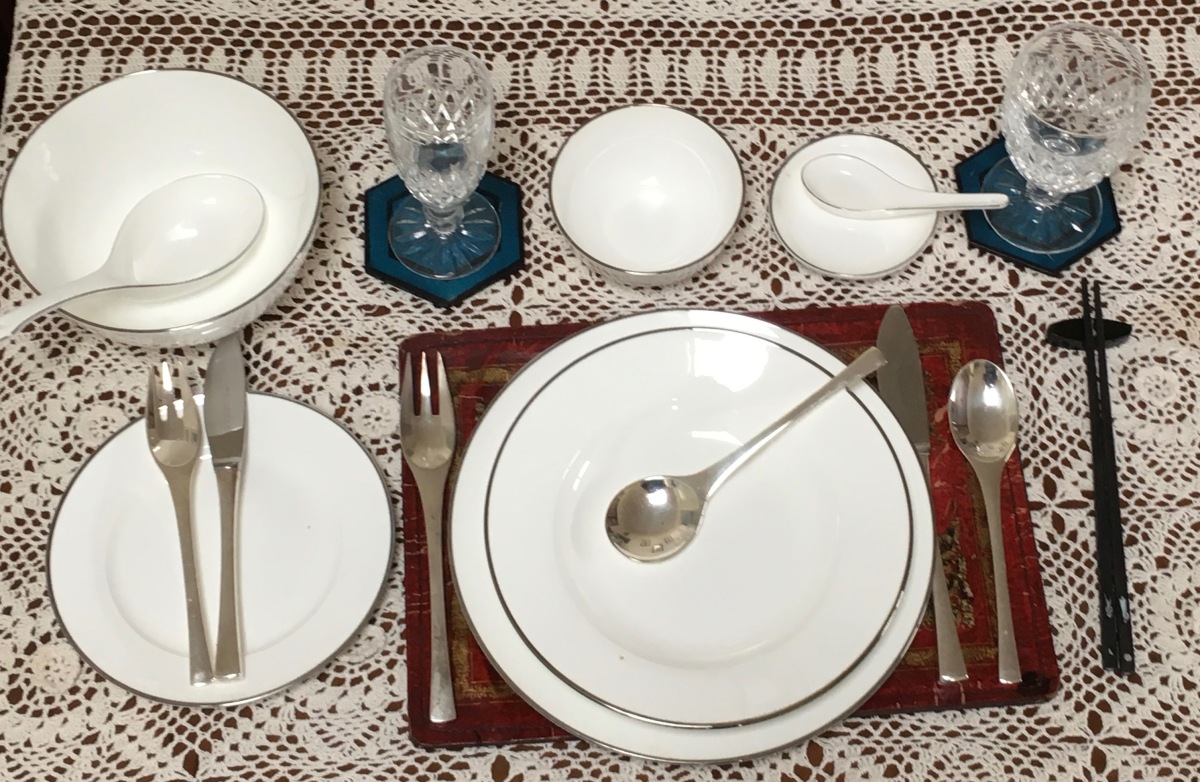 Ever since I returned from Europe last August 2017, I seem to have had a thing about liver. I’ve cooked it several times, pan-fried with a piquant sauce, in red wine and so on but recently I decided to do a chicken liver paté for a change, to be served with crusty little toasted squares.

My first experience of paté was when my father, back in the early 1970’s, used to bring home a thick, yellowed plastic tube of liver paté after he had experienced it on one of his European hoildays. The tube was about as thick as my forearm and filled with a flavoursome paté but whether it was chicken, pork or paté made from something else I have no idea. I do have a memory of my father piling half-an-inch of butter onto his finger of toast before balancing another inch thick of pate on top of it and relishing the lot along with a half bottle of wine and then going for a “snooze” on a Saturday evening before friends arrived to play cards and drink whiskey and sodas!

The first step was to check the liquor cabinet but no luck there – no brandy or cognac and not even the remains of a Christmas bottle of port. So, first step – off to buy booze and pick up the chicken livers, as well, I suppose. 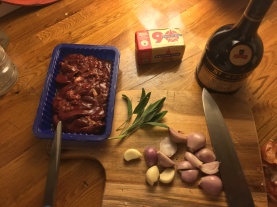 I bought a cheap bottle of French brandy – bottled in France, VSOP and so on but still cheap as chips compared to the heavy hitters like Martell, or Remy Martin or Hennessey, but never mind, I’m just going to chuck it in with the livers.

I ended up buying about 500g of organic, free range livers and a handful of shallots and off home to assemble everything – Brandy, butter, liver, shallots, garlic, a sharp knife and a few sage leaves from the garden.

First off, wash the livers in cold water and snip off – I used a scissors here – any sinewy bits or anything that looks less than appealing,

although when dealing with a handful of chicken livers, there’s not a lot to be said there. Not like a calf or a pig liver, which is a bit more of a substantial handful.

Anyway, next, chop the shallots and garlic finely. I used three large shallots which, when peeled, became about 8 or 9 cloves as well as three large cloves of garlic. In the end, I threw them all, along with half of the sage leaves into a food processor and whizzed them for less than thirty seconds.

Tip a generous lump of butter into a heavy fry pan, add in a glug of olive oil and when the butter foams, toss in the chopped shallots and garlic and the sage. Stir it around for a while until it softens and smells good and then chuck the livers in on top. 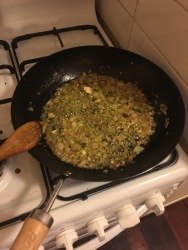 Shake the pan and give it a stir if you want and flip the livers over after two minutes or so. I added two full measures of the brandy then and let the liver 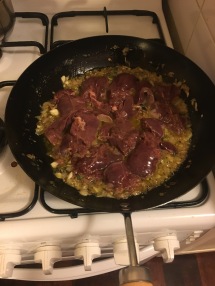 simmer for a minute or two. I fished out a large one and cut it in two to check the interior pinkness.

When satisfied, that the livers were cooked but still had a tinge of pink inside, I turned the heat off and let things cool down a bit before tossing them all into the processor again and giving them a good whiz. My butter, which I hadn’t put back in the fridge, was nice and soft now so I put a chunk of that into the processor as well as another shot of brandy, reasoning that most of the earlier alcohol would have cooked off. 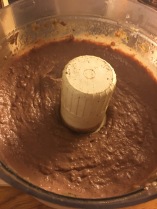 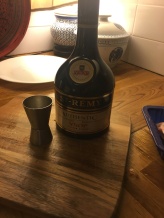 The penultimate step then was to scoop the mixture out of the blender and into a fine metal sieve. At first it seemed – and looked – impossible to force the liver mixture through the sieve but by dint of elbow grease and a large wooden spoon, I managed to mash the stuff through the sieve. 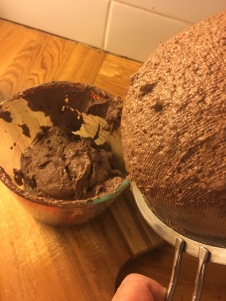 The sieve became quite heavy and when I turned it over, all of the finely sieved paté was stuck to the underside of the sieve. I scraped it off with a palette knife and dumped into two ramekins I had ready. It looked gorgeous – a rich chocolaty colour and a smooth, silky finish.

I smoothed the ramekin dishes with the back of a spoon and then wiped around the dishes with a tissue to make it neat. A sage leaf on top for decoration and then, finally, more melted butter poured over the paté to seal it and prevent it from oxidising and turning an unpleasant colour. Bingo – a delicious party snack. 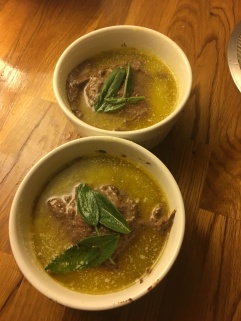 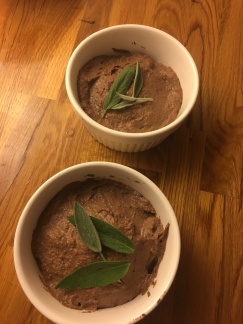