When I was in school, I used to enjoy Geography and was proud of my childish ability to name European capital cities. Then the world seemed more compact, comprising of Western Europe, The USSR, Asia, Africa, The Americas and Antarctica. Then, of course from the ethnocentric European point of view, there was the Near East (Egypt and Suez), the Middle East (Syria, Turkey) and the Far East (China, Japan) and, intriguingly, Asia Minor or was it Eurasia? And then there was something called the Balkans, famously described by Bismarck, I think, as the ‘sick man of Europe’ and the Caucasus, which, in my mind, was a sort of no-go area. Nevertheless, none of those areas was ever clarified in my mind.

Confusingly too, in American crime news and novels, there were always references to “Caucasian males, armed and dangerous, if encountered, do not approach”. Who or what they were I was never quite sure but I suspected that I might be one of them – no, not the armed and dangerous bit, of course.

Anyway, as I learned recently, the currently outmoded system of classifying our species depended on a 19th century German physiologist and anthropologist, Blumenbach. He classified human kind in traditional terms of Caucasian / Caucasoid, Mongoloid, Australoid and Negroid, but it was the use of the term Caucasian that fascinated me.

The Caucasus Mountains in modern day Georgia, and specifically the southern slopes,

were apparently the home of, not only the autochthones – the original members of mankind – and the site at which Noah’s (of the Ark fame) son, Japheth – the traditional Biblical ancestor of the Europeans – established his tribes before migrating into Europe proper but also the birthplace of wine more than 8,000 years ago!With a history like that, what was there not to like about exploring this hitherto unknown – to me – part of the world.

Factually, the Caucasus is the area of land, composed mostly of Georgia, Armenia and Azerbaijan (along with lesser, recognised and / or unofficial Republics of Ossetia (north & South), Abkhazia, Adjara, Ardsakh, bounded in the north by the Greater Caucasian Mountains and about 100 kilometres south by the lesser Caucasian Mountains.

Nevertheless, without bothering particularly to look at maps, I arbitrarily decided for myself that my Caucasus (trip) would start in Istanbul where the Bosporus drained from the Black Sea and would encompass everything as far as Baku in Azerbaijan on the Caspian Sea. It seemed simple – Black to the Caspian Sea with the Caucasus somewhere in between – and the wine bit sounded good, to me at least.

I remember, years ago, I dozed through a class called Comparative Analysis of an Uncommonly Taught Language, Turkish and English. The only definitive thing I took away from that class was that Turkish is an ‘agglutinative’ language. I could still remember a smattering of Arabic phrases from my time in the Gulf so language shouldn’t be a problem! All I had to do now was get to Istanbul and start discovering 8000-year-old wines! 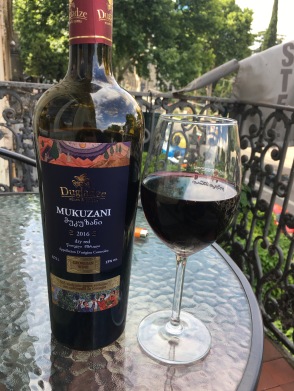