Evocative, far away places and names like The Ho Chi Minh Trail and The Silk Road are, perhaps unintentionally, misleading, as they both seem to imply a single trail or route. In actual fact, as the Americans discovered, the Ho Chi Minh ‘trail,’ parts of which had once been primitive footpaths that had facilitated trade for centuries past, was a vast and complex network of routes and roads.

Similarly, I discovered, the ancient Silk Road was the first intercontinental pathway in history for facilitating the exchange of trade, science, art, cultures and ideas through a myriad of trade routes between its empires and kingdoms.

One obvious route into the fabled East must have been along the southern shore of the Black Sea (Kara Deniz), inhabited by ‘hostile tribes,’ not least among them being the Amazons, according to Homer. With that in mind, I decided to start in Istanbul and travel east along the Black Sea before heading into Georgia and its neighbours. Trabzon, on the far south east corner of the Black Sea, would be a major focal point where the overland, intercontinental Silk Road divided and extended eastwards to the ancient commercial centres of the Caucasus and the great oasis cities of the Central Asia and on into China proper.

Once I started to look at Google Maps, it began to seem a bit more complex. Istanbul looked a long way from Trabzon, almost on the border with Georgia. This was going to involve lengthy bus trips, sadly, no trains here along the edge of the Black Sea. But first I had get out of massive Istanbul and cross the Bosporus!

Following the curving tram tracks from Gulhane, the first ferry terminal I came to on the sea front was closed but a terminal 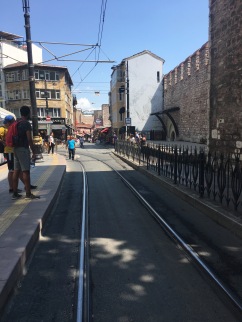 down had an old steamer crossing the Bosporus to the rather appealingly named bus station of Harem. 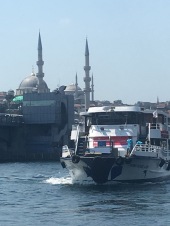 From there, apparently, I could catch a shuttle bus to somewhere else from where I could get the other bus to some place further down the coast.

Well, that was as much as I could understand, given my knowledge of Turkish.

However it all turned out well, a shuttle bus arrived more or less promptly and wove a tortuous route out of the city to a massive Metro bus station on the eastern outskirts. Into a sleek and modern coach which, no sooner had it pulled out onto immaculate highways,

than a conductor was pushing a trolley down the aisle offering tea, coffee, soft drinks and a choice of three snacks! Six hours later we rolled into Bartin only it wasn’t Bartin exactly as I was bustled off the coach and onto a waiting mini-bus that raced off in the opposite direction to another part of Bartin where another mini bus finally took me to Amasra.

According to Homer, warriors from Bartin fought on the side of Troy against the Greeks. Certainly Amasra, known as Sesamos when it was founded by the Miletians in the 6th century BCE, would be worth fighting for its elegance, beauty and location on a peninsula made up of two inlets joined by an ancient Roman bridge.

My hotel room overlooked the harbour where a few beers, a fried fish dinner, a bottle of wine (190 New Turkish Lira!), raki and a cup of coffee restored the inner man after the travels of the day.

Back to Bartin days later, only one mini bus this time, and another mini bus out to the bus station and off to Sinop, reputed to be the happiest town in Turkey. Dropped off suddenly from the coach, I was rushed across the road and into a mini bus (again), which eventually dropped me off on Sinop ‘neck,’ the birthplace of the 3rd century BCE philosopher, Diogenes the Cynic.

Apparently, some time like 335 BCE, Alexander the Great was intrigued by the philosopher’s eccentric habit of living in an empty wine barrel, paused on his conquest east to ask if Diogenes needed anything.

‘Yes,’ the philosopher replied. ‘Move away, you are blocking my sunlight.’ (Fairly brusque, I would have thought myself, given he was speaking to a proven conqueror.)

A solid castle, with a cafe on its top ramparts overlooking one of the most beautiful natural harbours of the Black Sea, served cold beer while a small quayside restaurant provided a magnificent feast of over 50 small dishes (mezze) for brunch. No need for a dinner after that! 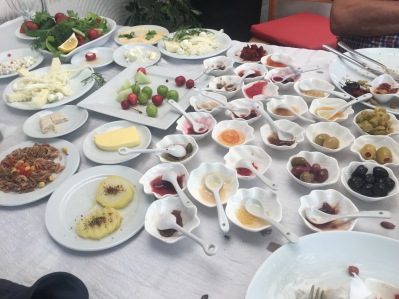 Tasty lentil soups for breakfast, along with tea and then later coffee with a sweet, tart glass of cherry juice, a little date and walnut snack and some weird, white, sticky mastic goo in a glass of water.

On to Samsun in a smallish but comfortable coach. Compared to my previous stopovers, Samsun seemed huge, a modern, industrial city that has served as a port for centuries. Its other claim to fame is that Kemal Ataturk landed there on 19 May 1919 to organise the defence of Anatolia. 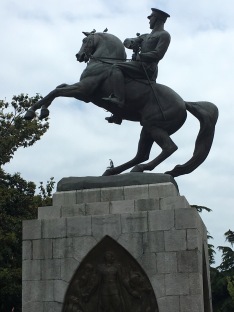 The Fiesta Bar, around the corner from the first hotel I saw when I got off the coach, was dark and gloomy inside and I seemed to be the only customer besides two sad looking elderly staff who hastened to turn on disco lights just for me in an attempt to enliven the place. The beer was cold but tasted bad and I put it down and picked up a kaleidoscope-like tube from several crates stacked near my table. Idly I twisted the tube and with a bang, the bloody thing ‘shot’ me in the thigh, not hard enough to tear my pants but hard enough to leave an angry mark on my leg. Time to leave, thinks I and I did, leaving an unfinished beer behind.

Frustrated that the Fiesta was the only bar in town, I took a taxi to what was gaily proclaimed as “Bar Street” about 10k from the hotel where the first ‘bar’ there didn’t serve beer but the Olympiad next door did. Back to the Fiesta only to find that it had an open, airy but empty rooftop, which I hadn’t noticed before, so it was definitely time to move on to Trabzon.

The procedure at the bus ticket office was now comprehensible – buy a ticket, wait for the shuttle to the bus station, board the large, black Metro CIP bus – premium economy class this time! – and relax. Within minutes of pulling out, a pretty steward served a meal and I snoozed on a very pleasant trip to Trabzon.

First impressions however were of a grimy city, well used by generations of occupying Assyrians, Miletians, Persians, Romans, Goths, Comnenes and Ottomans but more importantly perhaps, it boasted an easily accessible roof-top bar, Gunnes, which actually had people in it, drinking too. More lentil soup and succulent charcoal roasted lamb and it was time to move on away from beer and into the birthplace of wine in Georgia.