Arrived in Peru on a very comfortable overnight bus from Cuenca that took me down to Tumbes, Ecuador’s border post with Peru. Before I go any further, I have to clarify here what I mean by a bus. I have travelled on Greyhounds across the US back in the 70’s and on long distance buses through Western Australia since then but I have never come across such luxurious bus travel as I have done so far in South America. First off, most of the buses – excuse me, coaches – are modern, sleek, two storey jobs with plush, airline style seats. Unlike most airline seats however, all of the seats here recline from a minimum of comfortably back to completely back, i.e., 180 degrees or “Executivo” class, each seat fully contained and separate with its personal TV screen while the on-board loo would not be out of place on Airforce One. I digress.

Minor delays to exit Ecuador and enter Peru – a bit like going from Saigon to Cambodia, – and then back on the bus until a beach resort called Mancora before dawn. I could have gotten a room right away but the night porter obligingly suggested that I wait until 6:00 AM as, that way, I wouldn’t have to pay for the previous night! I waited outside the gated resort at a small kiosk drinking beer and waiting for daybreak with the local desperadoes and long term ex-pat exiles, Patrick and Giorgio. The latter, a wrinkled veteran, hinted the upscale resort was pretending to be a backpacker place before offering me tours to watch whales or deep-sea fishing, treks to hot springs and mud baths.
I’ve always enjoyed beach holidays – in fact up until my late teens or early twenties, they were the only type of holiday I had ever had – and this was the Pacific, rolling in along an endless flat coastline as far as the eye could see in either direction, while Stuka winged 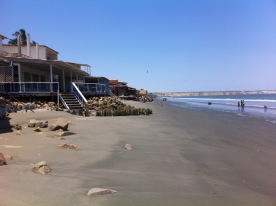 a stormy sky but the season here was coming to an end and there was never any pepper in the restaurants, the coffee was crap and long Pacific waves rolled in constant curls and I ended up being the only person staying on an isolated beach strip.

On down the west coast from Piura, a small northern town on a “Super-executivo” to Lima. It was like flying business class.  My seat was called a suite and reclined all the way back to a flat bed.  Two meals and drinks were served by a pretty little hostess, just like on a plane, and the loo was twice the size found there as well.

The approach to the capital was along sand-blasted looking cliffs while a sullen slate-grey Pacific rolled relentlessly against the shore where an immense grey city, perpetually wrapped in a silver sea mist or fog, sprawled.

It is always such a fantastic thing to go somewhere and then indulge with the national dishes and one of Peru’s national dishes is roasted guinea pig – I bet it tastes like chicken! Of course the other national essentials are ceviche and pisco sours – rum, lime, sugar and egg white whipped up in a blender.

Down on the Malecon I felt dwarfed by the magnitude of the leaden expanse of the Pacific stretching endlessly away, awed by an ocean too vast for me to get a handle on.

Another super executivo inland then, along with a few cocoa leaves to chew, to Cusco, an old Inca Indian capital, somewhere around 3400 metres. High i

n the mountains in Peru, the old Inca capital, at about 3600 metres above sea level means difficulty breathing – but not for the Incas who built the city more than 500 years ago. The Spanish came then and raped the city, stole the gold and used the blocks of

stone from the Inca temples to build their own churches and buildings. An amazing, solid city high in the mountains – a Siam Reap or an Ayutthaya alive with their original inhabitants, along with the tourists. Churches and squares everywhere instead of temples and pagodas – atmospheric and bewildering, warm during the day and then freezing at night. T 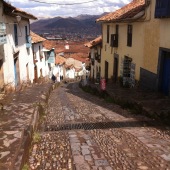 he steep climb between my hostel and Paddy’s Bar, the highest 100% Irish owned bar in S. America at 11156 feet, was an exhausting and panting effort! Machu Pichu become unattractive to me at an even higher altitude and I headed to the lower altitude city of Arequipa, surrounded by snow capped mountains and guarded by three active volcanoes – the last eruption only a dozen years or so ago.

To compensate for missing out one of the wonders of the world, I had my first roast guinea pig for dinner. I thought it would just be like chicken but it was more like rabbit or quail. Not a lot of eating on a guinea pig I have to say and I was glad I hadn’t ordered the fillet but instead had the whole beast, head, tail, claws, the works.

Before I had left Lima, a friendly bar-tender had given me a handful

of cocoa leaves, for the altitude she had insisted and I decided to go to Cusco’s local wet market where I was sure to find more. For a few cents a withered crone stuffed a bag the size of a pillow case with the bitter leaves and then threw in a few sticks of some grey resin, stevia it turned out, to offset the bitterness of the leaves when chewed. There was the most incredible variety and abundance in the market, fresh squeezed juices, fruits and vegetables, most of them totally unknown to me, piled high in gleaming mounds. Potatoes ranged in siz

e from peanuts to cabbage size and in colour from black to purple and yellow while the market itself was spotless, bright and airy. Corn was everywhere and in every size too from tiny kernels to knobs as big as my little finger joint.

Squat Inca women, all wrapped in heavy, embroidered shawls, colourful duster-like arrangements on their heads, sat in the main square, their legs straight in front of them, doing traditional weaving or selling local handicrafts.

Smiling girls in elaborate costumes decorated with silver coins and outlandish headdresses cuddled baby alpacas in their laps and posed against the massive stone blocks of an imposing church for tourist photographs but I was more interested in food.

Picanterias – local, family run small enterprise restaurants – serve traditional stews of beans and corn, stewed endlessly and served with meat barbecued on a cast iron parilla and I wanted llama. Although everyone seemed to know about picanterias, nobody seemed able to direct me to one so in desperation I took a taxi and told him to take me to his recommendation of a picanteria. After a moment or two of goggling at me uncomprehendingly, he slammed the car into gear and we roared out of the town centre up a gravelled road to a large, whitewashed building climbing the steep hillside. No llama, they assured me but ‘same-same but better” alpaca cooked on the parilla. The slab of meat was too much for me and I was glad of the extended stroll back into the city centre when the picanteria unceremoniously shut down in the early afternoon. Maybe a picanteria where the guinea pigs run around in the kitchen instead, feeding off scraps, would be more my size!

Fatigued from both the altitude and the culture overload about cities I had never before heard of, and their extraordinary churches, convents

and castles – all built at the behest of a handful of Spanish (less than 180 men) who invaded in 1530 or so and conquered the ruling Inca tribes and their vast empire stretching almost the length of the continent, I moved on to Puno, the stopover point for Lake Titicaca, the highest and one of the largest lakes in the world, making Lake Argyle in the Kimberley in West Australia look like a puddle.

I remember reading about the extraordinarily strong convictions of Thor Heyerdahl and his Kon-Tiki expedition and thinking how exciting to venture on such a trip on a balsa-wood raft. But for the small communities on the border between Peru and Bolivia who lived on massive floating reed islands showed just how buoyant their floating homes were.

Their high prowed reed boats provide both a security and a living on the immense lake. A bit like the old Celtic habit, I suppose, of building fortified, enclosed homes on brushwood platforms over water or bogs – the Crannóg.

Those reed boats now seem mainly for the tourists but at the same time I was rather relieved when my bus drove onto a sturdy wooden raft powered by a tiny outboard motor before attempting the border crossing into Bolivia. I warily climbed, with the other punters, into a tiny speedboat to make the same crossing in a fraction of the time it took our bus! The road would endlessly and sinuously up and up, it seemed into the snow-capped mountains and the high altitude began to affect my breathing again long before we seemed to make a circuitous descent into La Paz.

So far I’ve covered the length of the continent from Quito in Ecuador down to the tail end of Peru and thank God for loads of things like hot, sunny days and cold nights and heavy warm duvets on the beds, I mused, as I sipped a small bottle of good rum I had thoughtfully provided myself with against the cold.