A big red M outside Tbilisi’s main station marked the entrance to the city metro – probably the longest, deepest and fastest escalator I have ever been on and, like the bus fare from the border to Batumi which cost something like 30 ct, the trip on the metro were priced similarly or even cheaper.

The Georgians I met – generally local punters in a bar or café or wait staff in the same places – were all terribly proud of being Georgian and were especially keen to distance themselves from anything Russian, having finally extracted themselves from the sphere of influence wielded by Imperial Russia, Soviet Russia and The Russian Federation. Armed only with red roses, protesters demonstrated for twenty-three days outside the Georgian parliament in November 2003 in order to bring about peaceful change and a new slant towards westernisation.

This ‘turning away’ from their former rulers led to increased tensions with Russia, culminating in the brief 2008 war where the Federation forcibly backed two separatist revolts against the Georgian state. One night in a small bar half way up a hilly side street near the Opera, a fluent speaker of English confided in me that he hated the Russians. They killed his brother during the war in South Ossetia.

Popping up from the metro two stops away from the main station – again an incredible ascent – onto Shota Rushtavelli Ave I was amazed to see how fashionably modern Tbilisi was. I don’t know what I was expecting – perhaps something slightly less developed than a Western capital, perhaps something slightly shop worn – but what I got was an amazing melange of old and new.

Opposite the Opera house where I was staying, it was only a

short walk past the parliament buildings and down to Liberty Sq. and from there to the old town where crumbling buildings and shaky balconies edged fashionable pedestrian areas and parks.

Flea markets selling Russian junk crowded the bridge before a maze of small streets leading back up to Liberty Square in which the centre plinth was so high that I couldn’t actually make out what stood on top. 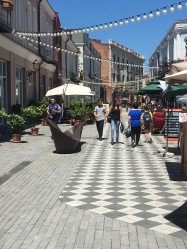 And then, as if this wasn’t enough, there was a cable car connection to the old Persian fortress overlooking the city and the hot spring baths with fashionable wine-bars and restaurants spread out below in inviting pedestrian areas and squares.

Despite having lived in Milan for almost three years, to my shame I never once went to La Scala, one of the most famous opera houses in the world. This time, staying opposite the Tbilisi Opera and Ballet State Theatre House on broad Shota Rustavelli Avenue, all I had to do was take the underpass and the Opera house was right there. 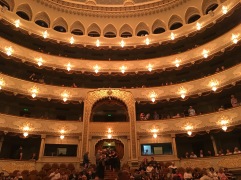 I saw the premiere of one of Verdi’s little known (certainly to me anyway) operas – Simon Boccanegra – an opera with a prologue and three acts with one intermission, the brochure informed me. A Google search of the plot baffled me but the splendour, the lighting, the colour, the drama and the music and the voices had me entranced – although the only word I actually heard was ‘Maria’ – and I became an opera lover overnight! 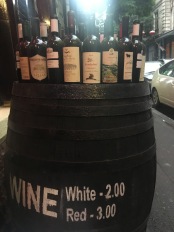 But time to leave the capital and explore the Kaheti wine region, the major wine growing area in the southeast. After all, in this part of the world, Neolithic farmers were making, drinking, enjoying and worshipping vitis vinifera 8,000 years ago so I assumed they knew how to make a decent drop.

And then there was the idea of  hiking in the Sveneti – the mountains region up in the northeast, rubbing shoulders with the breakaway state of Abhazia.

More of that later.