I loved the heroic stories of the ancient Greeks when I was a kid. I actually knew the difference between Theseus and Perseus and knew all about Helen of Troy (‘was this the face that launched a thousand ships?’), the labours of Hercules but I particularly enjoyed the tale of Jason and the Argonauts in their quest on the oracular ship, the Argo, for the Golden Fleece1. guarded in the kingdom of Colchis. Just as Troy was re-discovered as a real place, in the nineteenth century, Colchis too has been identified as an actual place at the eastern end of the Black Sea, in modern day Georgia.

I never bothered to visit Troy when I was in Turkey recently but I was intrigued to pass through the former kingdom of Colchis, just north of Batumi in the former soviet republic Georgia. In the main square, there was no statue of the so-called hero Jason, but instead, on a towering column, proudly holding aloft the Golden Fleece, the statue of Medea, Hecate’s witch-priestess, the sorceress daughter of King Aeëtes and the Caucasian nymph Asterodeia and Jason’s accomplice in his quest for the Golden Fleece.

Statues generally honour male heroes but here was a statue honouring this incredible woman, driven by forces beyond her knowledge, and led by her own ambitious, driving powers committing the most appalling acts of fratricide, regicide and filicide in the name of love helplessly engendered by the very gods themselves. Mind you, I wouldn’t say Jason was much of an angel, either. Here’s my take on Medea’s story. 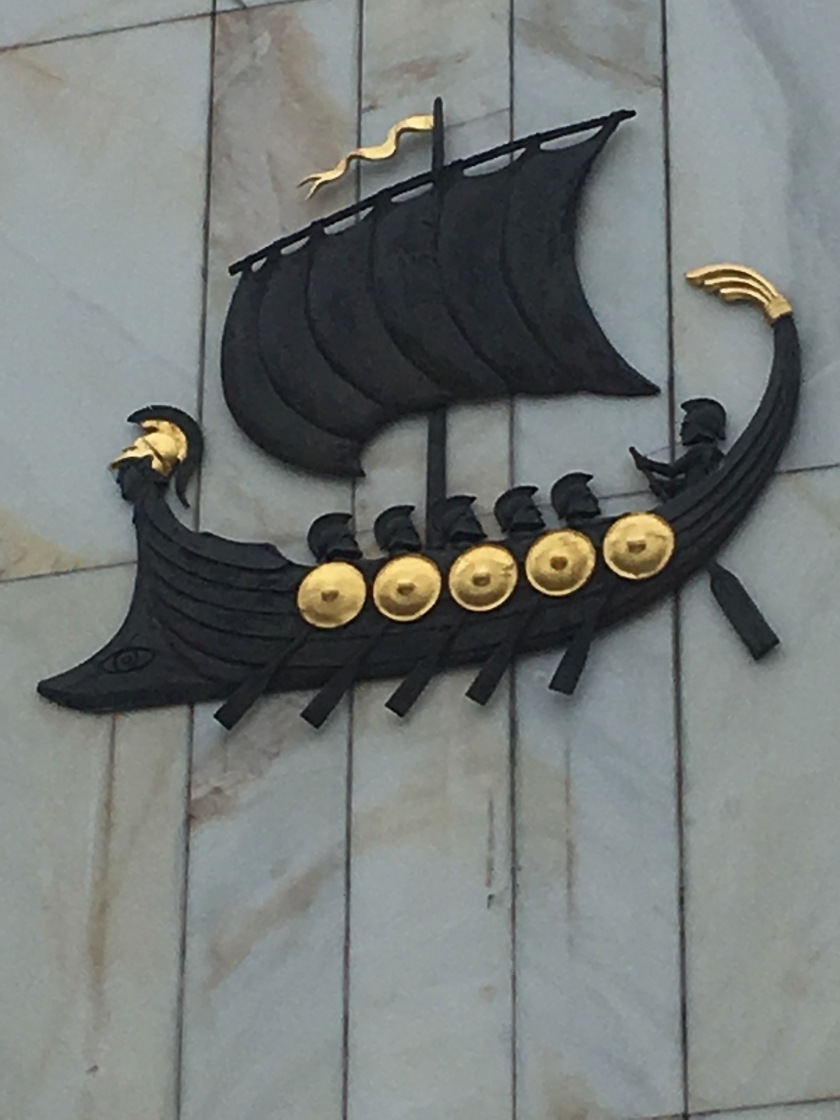 Medea, the daughter of King Aeëtes of Colchis, the guardian of the Golden Fleece upon which the security of the kingdom depends, is smitten by Jason on first sight because the goddesses. Hera, who had sworn to aid Jason in his quest for the Golden Fleece, and Athene, who wanted revenge for the past misdemeanours of Pelias, usurper of Jason’s throne, persuade Aphrodite to bribe her son, Eros, to make Medea conceive of a fierce passion for the Argonaut.

Aeëtes refused to hand over the Golden Fleece, reasonably enough and threatened to tear out Jason’s tongue out and chop off his hands. Medea convinced her father, the king of Colchis, against his will, to offer Jason the fleece on condition of fulfilling seemingly impossible tasks – yoking fire breathing, brazen hoofed bulls, sowing dragon’s teeth, from which fully armed warriors will spring, itching for a fight and other heroic acts.

Medea promises to use all her powers to help Jason to yoke the twin bulls and to overcome the sprouting warriors on condition that he love her forever and take her back to Greece on his return. Jason swears by all the gods of Olympus to keep faith with her. Medea concocts blood-red pomegranate juice mixed with the two stalked Caucasian crocus and honey, which shields Jason’s body and weapons.

Aeëtes, shocked at the ease at which Jason performs the impossible tasks and unaware of his daughter’s assistance to the hero, goes back on his word and foolishly confides in her that, during a banquet to celebrate Jason’s achievements, he plans to burn their ship, the Argo and massacre all his companions, the Argonauts.

Medea immediately leads Jason and his companions to a grove where the Golden Fleece hangs, guarded by a dragon of a thousand coils, larger than the Argo itself. Medea soothes the hissing monster with her occult incantations as Jason stealthily unhooks the Golden Fleece from the oak tree and hurries down to the cove on the Black Sea where the Argo waited.

Setting sail immediately, an enraged Aeëtes followed Medea and Jason, chasing, not only his daughter and the fleece but also, his only son, Medea’s brother, Apsyrtus who had accompanied them. Desperate to slow her father, Medea kills her younger brother and tosses him, piece by piece, overboard, forcing her father to stop and collect each piece in order to be able to provide full funeral rights.

Unfortunately, the oracular beam of the ship Argo, refused to sail further with them aboard until atonement be made for the murder.

Jason and Medea travel overland to Aeaea, the island home of Medea’s aunt, Circe who reluctantly purified them of the murder with the blood of a young sow! The Colchian pursuers, guessing that Jason and Medea would be picked up from there, demand from the king of Aeaea, on behalf of their king, Aeëtes, the return of both the fleece and Medea herself.

Citing ill treatment at the hands of her father, Medea sought protection from the local queen. The king was obliged to respond to the demands of the Colchians and, influenced by his wife, proclaimed that if Medea was virginal, she must be returned to her father but otherwise she could stay with Jason. The queen immediately told Medea and she and Jason bedded there and then on the Golden Fleece.

Heading home, passing the isle of Crete, Talos, a monstrous bronze guardian, blocked passage to the Argo by but Medea soothed the brute with her honey mouth, promising to make him mortal if he would only drink from the potion she offered. Gulping it down greedily, Talos fell into a deep sleep and Medea removed a bronze plug from his heel which sealed the single vein running the length of his body. Out gushed a colourless fluid which had served him as blood, rendering him inanimate.

Finally reaching Jason’s home of Iolcus, they discover, that in their absence, the usurper Pelias has finally killed Jason’s aged father and mother and fortified the city so that it is impenetrable to the Argonauts. Medea then offered to take the city single handedly and told Jason to hide the ship nearby and wait for her signal of burning torches on the palace roof. Disguising herself as a crone and carrying a hollow image of the goddess Artemis, Medea approached the city gates and demanded entry, crying out that the goddess Artemis wished to honour the piety of Pelias by making him young again so that he could sire heirs to his throne.

Pelias, no fool, doubted her until Medea transformed herself before his very eyes into her youthful and beguiling form. Behold now the power of Artemis, she cried as she chopped an aged ram into thirteen pieces and boiled them in a cauldron before the king’s wondering eyes. Muttering Colchian incantations and appealing to Artemis to assist her, Medea pretended to rejuvenate the ram by suddenly producing a frisky lamb from inside the hollow stature of Artemis that she had positioned beside the cauldron. Fully convinced now, Pelias, lulled by Medea’s charms, fell into a deep sleep on his couch. Medea then ordered his daughters to cut up their father’s body, just as she had done with the ram, and boil him in the same cauldron so that the rejuvenation could begin. As soon as the bodily parts were in the cauldron, Media led the daughters up onto the roof of the palace, each of them carrying a lit torch so that they could invoke the power of the moon while the cauldron was simmering. Seeing the lit torches being waved on the palace roof, Jason and the Argonauts stormed the city successfully only to later accept banishment by the Iolcus council. Jason, fearing the vengeance of Pelias’ daughters for the cruel murder of their father, wisely abandoned the city to them.

Following Medea’s advice, Jason set sail again on the Argo and presented the Golden Fleece to the temple of Zeus before heading to the Isthmus of Corinth. Medea, the only surviving child of her father Aeëtes, the rightful king of Corinth before he moved to Colchis, now claimed the throne and the Corinthians, awed by both Medea and Jason’s deeds, accepted Jason as their king.

A prosperous decade passes and Medea presents Jason with several children but his eye is caught by Glauce, daughter of king Creon of Thebes, and he renounces his vows to Medea, determined to take Glauce to his bed. Medea urges him not to, reminding him that he also owes the throne of Corinth to her but Jason insisted that an oath made under pressure was non-binding. Medea appeared to give way and sent all of Jason’s children to Glauce bearing a hand-woven white gown and a tiara of fine gold as a peace offering. No sooner had Glauce slipped on the gown and placed the tiara on her head when she burst into unquenchable flames, consuming not only her, but also her father, King Creon and all the child messengers that Medea had borne Jason.

Leaving a destitute Jason, unloved by the gods for having forsaken his vows to Medea in their name, Medea, fled in a chariot pulled by fearsome serpents, first to Thebes and then Athens before hearing her uncle Perses had usurped the throne of Colchis from her father Aeëtes. Hastening home Medea restored and then expanded and ruled the kingdom with her father. 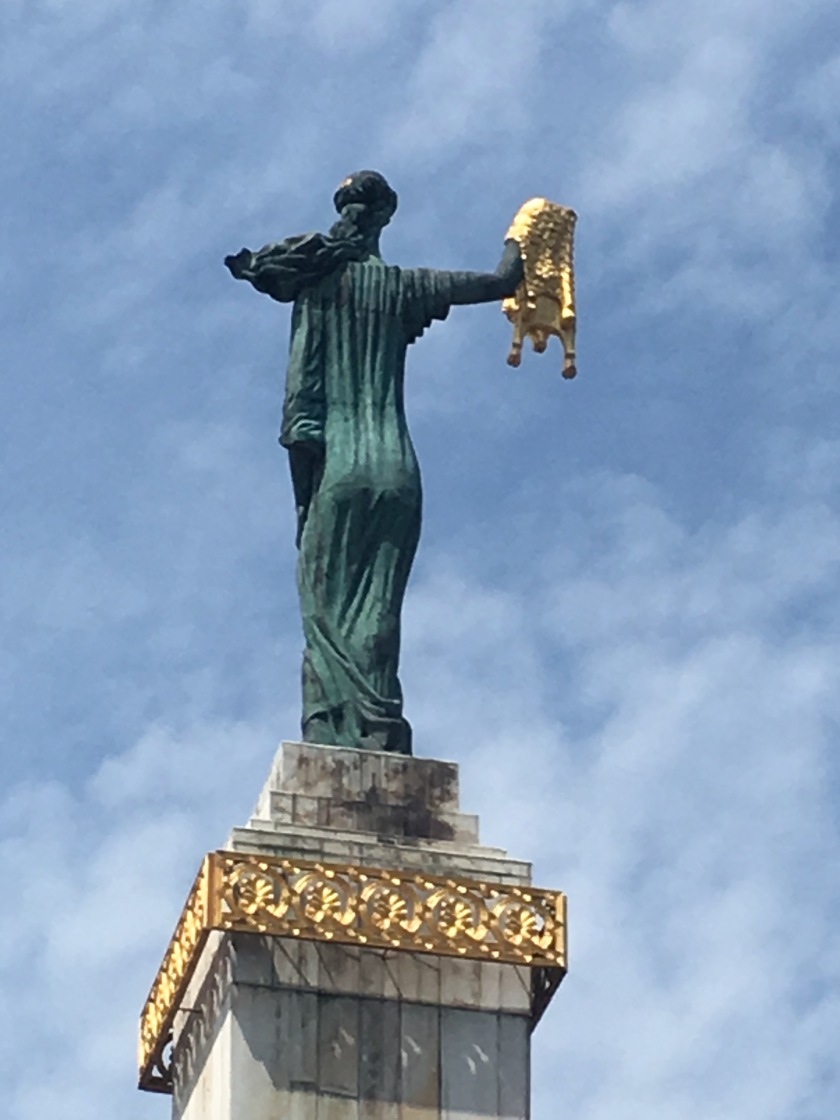 I suppose that counts as a happy ending for Medea but poor old Jason wandered destitute until, finally returning to his birthplace, he sits down to rest under the beached remains of his ship, the Argo, and a beam from the bow falls on him, killing him outright!