Along with the rise of the hill forts circa 1000 BCE, and the emphasis on items both as weapons and ornamentation, the stratification of society, into chieftains or kings surrounded by nobles and warriors supported by priests or druids interceding for farmers, craft-workers and slaves, was firmly established. This hierarchy inevitably involved the notion of the hero or champion and was marked by a leader able to distribute gifts and largesse while, at the same time, host feasts and celebrations where warriors would vie with each other for the favour of their liege. Such restrained power necessitated the rise of the heroic warrior, the hero, to stand alone and unbeaten. No doubt the flowering of literature of the twelfth century French Romance and Mallory’s later Arthurian romances must all have stemmed from the Iron Age concept.

Not everyone would – or could – be a hero. While all young boys played fierce physical games with wooden sticks – a proto Hurley? – before weapons could be handled, a hero was always set apart. Never having recognised parents and a mysterious background, Arthur is fostered at an early age just as Oedipus is brought up in ignorance of his parents and Lancelot of Arthurian legend is raised by the shadowy Lady of the Lake while Cú Chulainn’s birth is similarly shrouded in mystery.

Not obvious parentage means the hero has no name and must acquire one through his own actions – Sétanta kills the forge hound and becomes Cú Chulainn, while later Celtic heroes, Finn and the Welsh, Gwion, gain their later names of brilliance and light. The significance of having no family means a concomitant feeling of standing alone – the hero can expect no aid in his quest for glory but at the same time no limits are placed on his ambitions for his name to live on, forever, on the lips of men.

Never accepted in his own country, the Iron Age hero must leave his comfort zone, undergoing training at the hands of learned druids or experienced warriors. Tests of physical prowess, – ability to jump or vault over a stick their own height, run barefoot through a forest without breaking a twig underfoot, defend against 9 men throwing spears, remove a thorn from his foot while running – must be passed, but the hero must also be erudite and knowledgeable about poetry. Strangers approaching the territory of a chieftain had to undergo single combat or compose a poem on the spot.

Cú Chulainn trained under the tutelage of the warrior woman, Scáthach, who presented the fearsome gae bolga to the hero, along with a warning of its consequent use. Beowulf sought out sea monsters before going on to defeating Grendel and its mother, Arthur trained under the venerable Sir Ector de Maris, all to achieve the fame they sought. Beowulf leaves for the court of Denmark; Tristan of Arthurian legend travels to Ireland from his native Cornwall.

Nowhere in the manuscripts is it ever suggested that Cú Chulainn is not from the kingdom of the Ulaidh (modern day Ulster in Northern Ireland) nevertheless, when all the fighting age men of the area are stricken with an ancient curse, Cú Chulainn alone is exempt. Like all his fellow outsiders, having no ties to hamper his actions, the hero inevitably becomes a force for disruption, change and catastrophe.

Heroes must claim their weapons forcibly or obtain them from supernatural forces – Lancelot receives his sword from the Lady of the lake, Beowulf discovers a sword in the lair beneath the lake, and Cú Chulainn smashes King Conor’s armoury before the king himself presented the nascent hero with his very own weapons while the youthful Arthur plucks the sword from the stone. 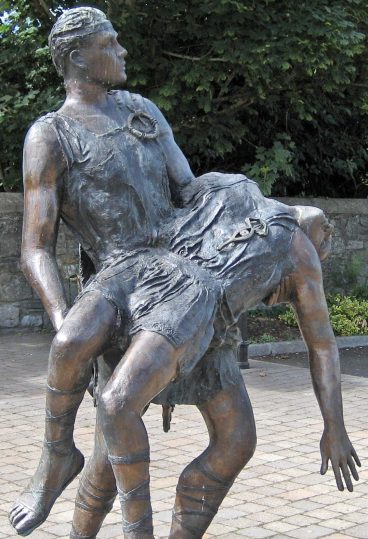 A tipping point occurs in all the lives of the heroes when the focus on honour and glory supersedes the needs or bonds of their society. Achilles rejects his mother’s help and chooses to die before the walls of Troy. Cú Chulainn hears the druid’s prophecy of bloody and glory but still chooses to seek the latter. This tipping point influences the remaining portion of the heroes’ life. Every further irrevocable action with the umbrella-like spear, the gae bolga, that Cú Chulainn accepts from the hands of Scáthach maintains or furthers the glorification of his name. Chulainn, in his killing fury, is just as prepared to slaughter his enemies as his compatriots once his battle fury descends upon him.

Mortal enemies of the heroes often involve demonic or supernatural forces as human weapons have little effect upon them, Achilles is dipped in the pool of immortality, Arthur is protected by the power of Excalibur and Cú Chulainn is unassailable when he is in his battle fury. The inevitable downfall of the hero is, therefore, always linked with the breaking of a vow or the forsaking of an oath. Arthur is killed at the hands of his illegitimate son, Cú Chulainn dies alone after breaking the taboos that ruled his life, Beowulf meets his demise by neglecting his role of kingship and acting as if he were still the hero.