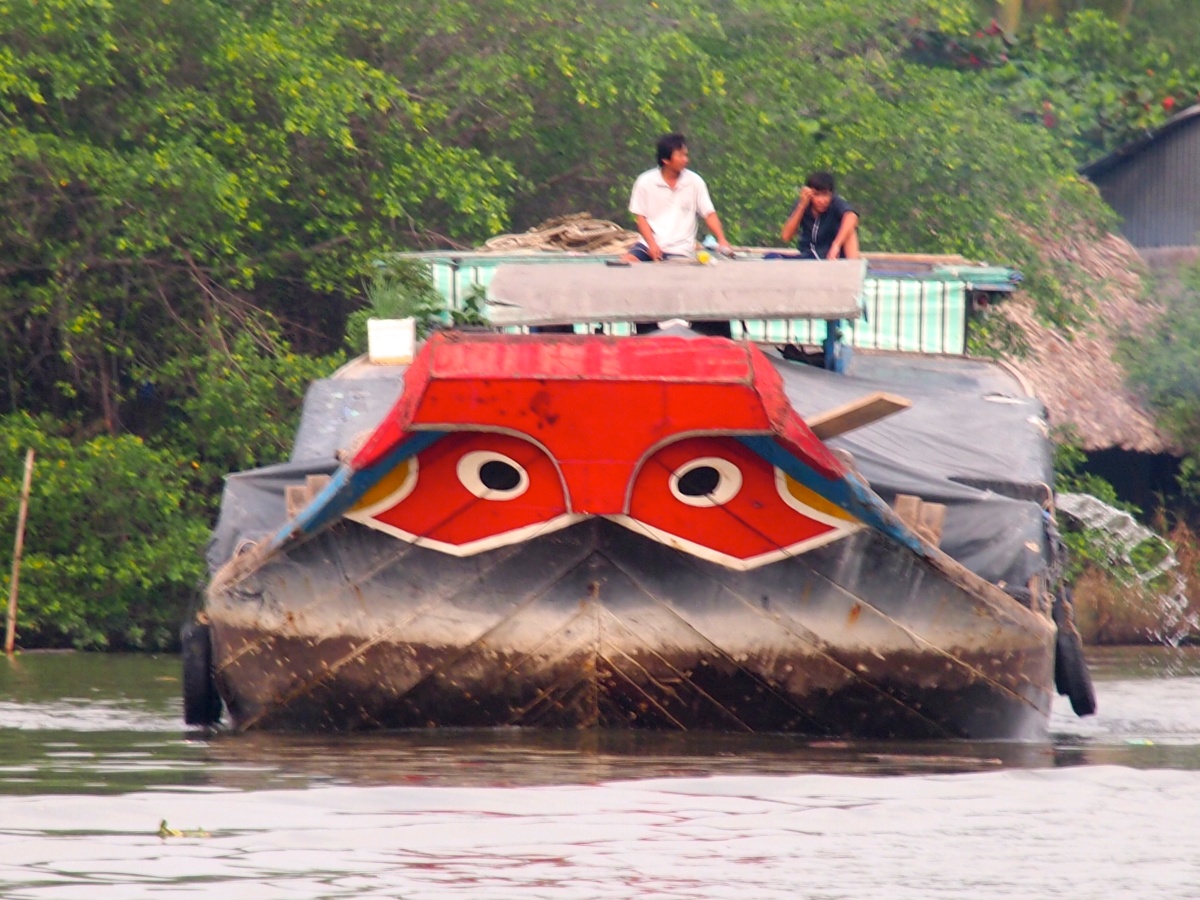 Continuing on from – Off the Rails in Hong Kong

Back to cultured and reserved – in comparison to brash and reckless Saigon – Hanoi and time to start looking for the next train on the journey – the Hanoi to Da Nang leg which was going to be the longest leg so far at about 14 hours. My train south wasn’t for another few hours. Ignoring the blandishments of The Irish Wolfhound Pub, I sat on a tiny plastic stool on a street corner at some busy intersection in the old town and drank bia hoi, or so called fresh or draught beer which, for some reason was incredibly cheaper than drinking beer in a bar. Each generous glass of bia hoi cost 5,000 dong (about US 25 cents) as opposed to the more usual 25,000 or 30,000 dong in bars.

I had booked a sleeper to Da Nang yet every backpacker I talked to mentioned that they were going to Hue (Huey, as one girl pronounced it). Hmm, thinks I, have I made a mistake here, I wonder. No-one seemed to be that interested in Da Nang! Sure enough, at Hue at about 10 the following morning, half the train emptied out as I strolled down the swaying corridor. Nevertheless, the best part of the ride was between Hue and Danang as we seemed to crawl along a series of precipitous cliffs looking down on deserted rocky beaches on one side while on the other side, rice paddies with muddy water buffaloes standing passive sentinel, stretched away to misty mountains and outcroppings and I congratulated myself on that. 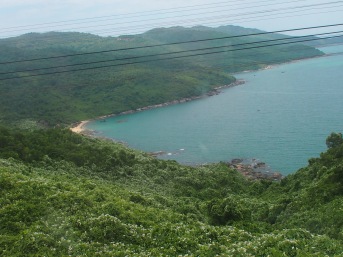 Arriving in Da Nang at about 2:30 Pm – the train really went slowly along the cliff face – I was met with the usual gaggle of taxi and motorbike touts but shouldering my backpack, I marched through them and started to wander. Whenever I came to a junction I turned right, hoping that something appealing would appear but in sharp contrast to Hanoi – and more so to Saigon, the streets seemed oddly empty, both of people and traffic. Why, it was perfectly feasible to cross junctions with barely a look to the left, right, behind, in front, left and right again before crossing.   Beginning to get hungry – the last time I had eaten was a good 20 hours previously – I was getting desperate for a coffee and something – anything – to eat when a large motorbike sidled up beside me and a guy politely asked if he could help me with directions.

Turned out he was an “Easy Rider” guy, one of a growing band of semi-professional drivers and guides who specialize in taking travellers off the beaten path on do-it-yourself style tours. I had used an Easy Rider before in Dalat and had a great day out with them. You give them the general direction you might like to follow and they take you there by back roads, over rivers and sand dunes, through the mountains and down the valleys in a way that scorns the tour bus.

Just take me someplace for a coffee and then I’ll decide, I told Binh. It turned out that we had been born in the same month and year although he claimed to be a year older as an extra year had been added on to his birth year during the recent Tet. (Most Vietnamese do not celebrate their actual birthdate – birthdays are a western phenomena. Instead, every Vietnamese starts off at the age of one and then gets an extra year tacked on every Lunar New Year, hence Binh’s seniority.

Anyway, the upshot of the whole deal was that Binh convinced me to saddle up and leave Da Nang immediately and head on up the road to Hoi An about 45k away and finishing the coffee, I put on a real motorbike helmet – not one of the more usual, plastic coated tin hats most people seem to favour – swung my leg, with some difficulty, over the back support and settled on to another Easy Rider drive.

Whipping down the coast highway, Da Nang seemed to be experiencing a construction book in luxury holiday and golf resorts. The beach side of the road was lined with immense gates and walls with immaculate landscaping but both the accommodation and the beach were out of sight. Skirting by the ruins of the largest US air base during the American War, the other side of the road was taken up by lush green fairways for the several golf courses that looked squeaky new and manicured. 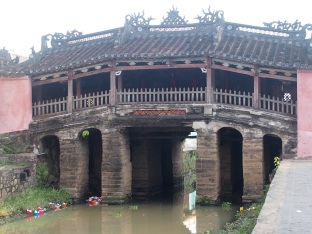 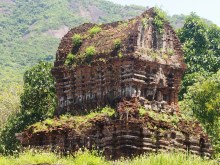 And then we were into Hoi An and Binh obligingly picked a rather fancy looking hotel right on the river, a few hundred metres from the iconic Japanese bridge which has become a hallmark for this World Heritage town. Luckily, the hotel while looking quite fancy – it even had a swimming pool – was not exorbitant and well within my budget. 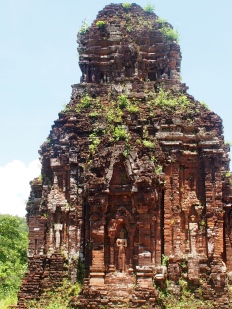 Before he gave me directions to where I could get a cold beer, Binh persuaded me to sign up for a full day motorbike trip around the surrounding countryside, promising an array of sights culminating in Vietnam’s own “Angkor Wat”, the ruined Champa kingdom at My Son.  Ruined was haerdly the word for it.  Devastated time and war blasdted would be more accurte.4  US marines had “saved” the site from the Vietcong back in the day by pulverising the remaining buildings and temples, apparently.